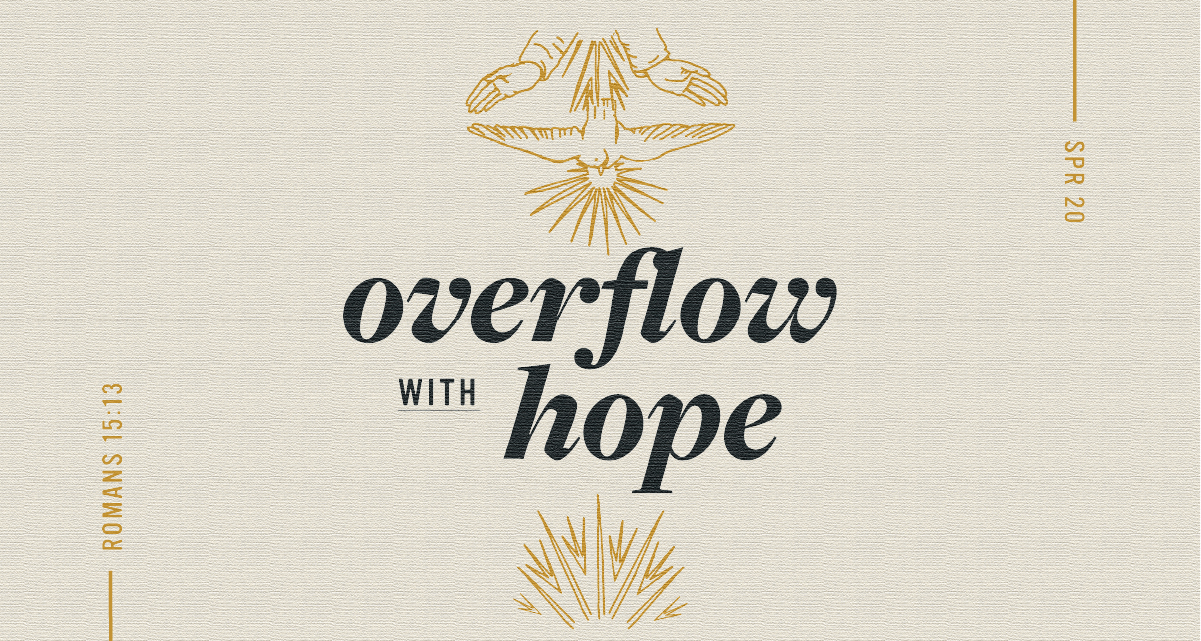 “Overflow with Hope” Devotional | May 11

Each Monday during this season of remote living and learning, the Chapel Office is sharing a devotional written by a member of the Gordon community.

Prisoners of Hope
By Nathaniel Quartey  ’21

“Moreover, as for you, because of our covenant relationship secured with blood, I will release your prisoners from the waterless pit. Return to the stronghold, you prisoners, with hope; today I declare that I will return double what was taken from you.” (Zechariah 9:11–12)

In the wake of the COVID-19 crisis, a new reality that seemed almost irrational involved “excessive buying”—in particular, the panic buying of toilet paper. On March 4, 2020, the demand for toilet paper at Mount Druitt Coles in Sydney, Australia, was so high that it became necessary to station a security guard over “the toilet paper aisle to monitor the situation.” While many have tried to provide explanations to the intriguing consumer response to the coronavirus pandemic, it is important to ponder how we, as people of faith, ought to respond to the current crisis.

Consumer behavior researcher Kit Yarrow claims that when people feel a situation is uncertain, they “feel a great urge to do things.” Uncertainty disrupts the helms of control that most people hold on for a sense of order, safety and comfort. Uncertainty stirs panic and anxiety. Yarrow also claims that “when we feel anxious . . . the antidote to anxiety is always control.” But do we really have control over the changing scenes of life? And is the quest to regain control the best response to a crisis?

In his sermon “Learning in Wartime,” C.S. Lewis tells his audience that:

“Human life has always been lived on the edge of a precipice. Human culture has always had to exist under the shadow of something infinitely more important than itself . . . We are mistaken when we compare war with ‘normal life.’ Life has never been normal.”

The point C.S. Lewis tries to get across is that we entertain a false sense of normalcy since life constantly proceeds through calamity. For Lewis, “Even those periods which we think most tranquil . . . turn out, on closer inspection, to be full of cries, alarms, difficulties, emergencies.” Thus, war (or for our current situation, a pandemic) does not make life abnormal; it only exaggerates the challenges we already wrestle with. The apostle Paul likewise concurs with this notion of abnormality and chaos and frustration by asserting that the entire creation is held in bondage to decay. In Romans 8:20, Paul says “creation is confused, but not because it wants to be confused. God made it this way in the ‘hope’ that creation would be set free from decay” (CEV, emphasis mine). From this perspective of Scripture, we clearly perceive the permanent human situation in a fallen world. Moreso, we are also offered insight into how we should respond.

Paul says that the creation was subjected to confusion in hope of a “glorious freedom.” It is at this point that I would like to draw your attention to Zechariah 9:11–12. In a place where the prospects of survival seem impossible (recall “a pit in which there is no water” in verse 11), the prophet speaks to the hopelessness felt by the people by assuring them of deliverance. Moreover, Zechariah calls these people “prisoners of hope.” They are prisoners because they are bound; their feet and hands are possibly locked in shackles (recall the current equivalent of “lockdown” or “quarantine”); they have lost control over some aspects of life. Yet they are prisoners of “hope.”

What, then, is hope? Hope is the certainty of an expectation. Hope is that which calms anxiety in the midst of a crisis because it acknowledges the crisis as a transient reality that would be replaced with a permanent reality which is desirable and good. While hope casts a vision of a positive outcome, it is not a passive virtue that only resides on the canvas of the imagination. Hope actively moves its possessor to pursue after that which is hoped for. The prophet admonishes the people to “return” to the stronghold. The word “return” from the Hebrew sub implies repentance. The return, in other words, implies a change of mind, attitude and the direction of a self-centered will to seek after God’s will. This is the kind of response that guarantees the outcome of the promised “glorious freedom,” because the source of the Christian’s hope is God. He is the “God of hope” (Romans 15:13) and he is the stronghold for all prisoners of hope. Instead of striving to seize control over the chaos that exceeds the boundaries of our control, we are admonished to rather allow ourselves to be seized by the virtue of a transformative hope which does not fail.

Looking for some encouragement during these uncertain times?
The Gordon worship teams have curated Spotify playlists full of hopeful and uplifting worship songs for the Gordon community.