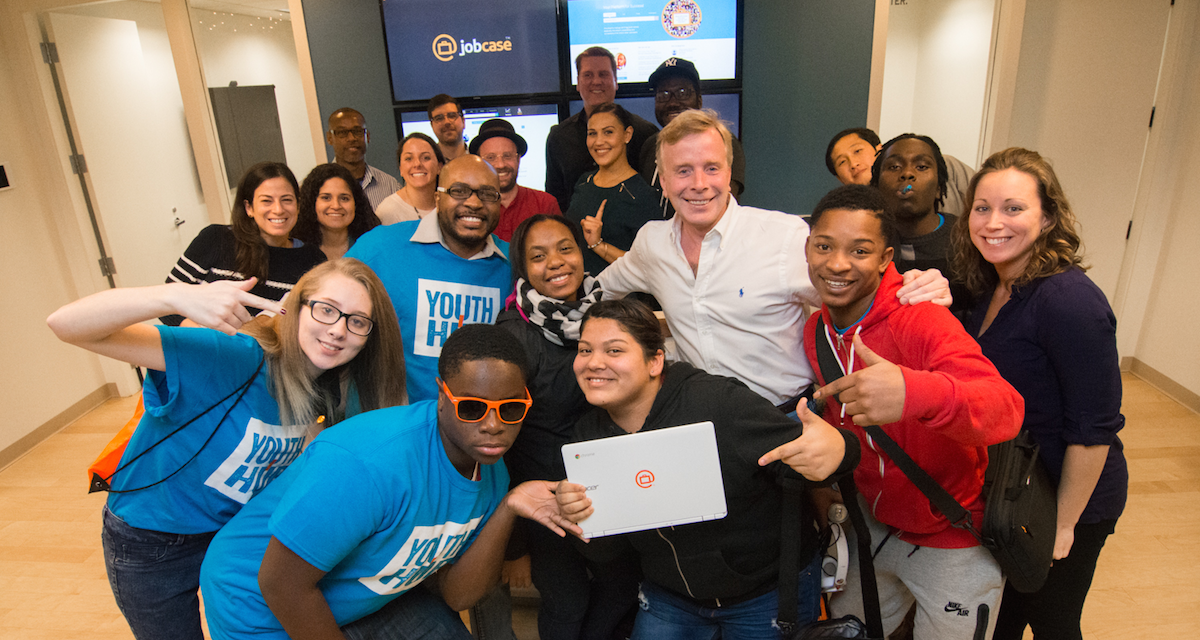 Rachele Gardner ’09 (pictured above, far right) has chosen to fully invest in her Boston neighborhood, ouborchester. She’s lived there since her final semester at Gordon, when she pursued a full-time internship at a local nonprofit.

The largest neighborhood in Boston, Dorchester also has a high youth unemployment rate. “Ninety percent of youth locally say they want or need a job, but only 25 percent in any given month have a job,” Rachele explains. In contrast, “nearly 60 percent of youth from middle-to-upper-income families” across Massachusetts have jobs.

In response to this concern, Rachele started and now directs Youth Hub, an organization that “focuses on increasing the capacity in the Boston neighborhood to employ youth,” she says.

At Gordon, “professors didn’t hesitate to talk about difficult things and to really tackle issues head-on,” including systemic injustice, racism and classism, Rachele says. However, “a foundation of Christian thought and practice” grounded those discussions in hope.

After graduating, Rachele earned an M.S.W. from Boston College. During that time, she completed a community assessment that connected her with Codman Square Neighborhood Development Corporation. She was invited to join Millennium 10, a local coalition working to address community concerns by engaging residents.

The Millennium 10 team came up with two main strategies. One was Crossroads Community Café, a business that would train and employ people locally, as well as being a central gathering place to build community.

Although the café had some positive effects, “it was really challenging to get the business piece of that started,” says Rachele. When the coalition implemented the program to help local youth find jobs, she was glad to shift her focus to the social rather than business side of community development.

“My background and passion is really in youth work,” says Rachele. In the past four years, she’s provided leadership training for 40 youth, and has engaged over 300 youth in various capacities.

Recently Millennium 10 has developed a partnership with Jobcase, a job-search platform that integrates aspects of social media. With Jobcase and Code for Boston, Youth Hub is working to make a smartphone app that would make it easier for youth to find jobs.

Youth Hub also runs a participatory-action research program. “We train youth with different research skills, particularly surveys and focus groups,” Rachele explains. Then “they go out into the neighborhood and engage their peers through answering surveys about youth issues.”

That research provides data needed to analyze the community’s needs and advocate for changes. The team recently presented their model to researchers from across the country at a workforce-development conference. They’ve also written an article, which will be published in a peer-reviewed journal.

In all the projects Rachele manages, the focus is on trying to solve problems, and involving the community in that process. This type of community restoration is “working towards justice,” Rachele says. “It’s an awesome way of showing the love of Jesus in the community by meeting real, practical needs.”