This is the third in a series of seven articles featuring the research conducted by faculty members on sabbatical during the fall 2018 semester. A shorter version of this article originally appeared in the spring 2019 issue of STILLPOINT. Read more articles from this issue here: stories.gordon.edu/tag/stillpoint2019 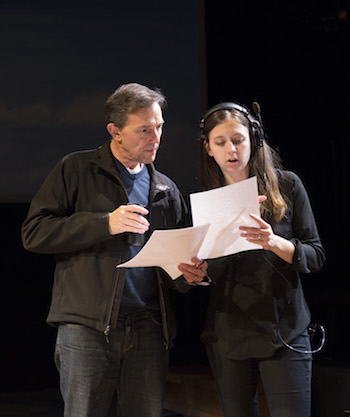 When creating a theatrical production, directors must ask questions. All four of Jeff Miller’s (theatre arts) sabbatical endeavors required thoughtful inquiry, and took him as far as Australia and as near as campus.

When Miller encouraged former Assistant Director of Global Education Liesl Smith to turn a short story she’d written into a play, he then led a read-through for her to hear Beneath the Heavens out loud. Because fiction storytellers tend to over-write for the stage, Miller says, the read-through helped Smith to ask, “What works, [and] what can be trimmed?” Toward the goal of transforming the work to into a more polished script, he helped envision what her story—about a young Mongolian girl who, against odds, becomes the village wrestling champion—might sound like to an audience.

Next, Miller directed a new musical in Saint Paul, MN, Life Goes On. Bringing the show to life on stage for the first time, Miller helped determine how to bring out the serious elements of story about death and grief in the form of a musical. He and his co-creators at the Bucket Brigade theatre company asked, “How do we tell the story as directly as possible without distraction?”

After Life Goes On opened to enthusiastic reviews in September, Miller returned to Gordon for Freud’s Last Session. As director of the two-man show, a dialogue between Sigmund Freud and C.S. Lewis, Miller was tasked with the challenge of visually driving the play’s conversation. “It’s just talk,” he says. “How do we make it interesting?”

Finally, Miller traveled to Australia to help former Communication Arts faculty member Jo Kadlecek launch Joining the Dots Theatre Company and direct its debut performance. Staging W;t, the story of a John Donne scholar dying of cancer, Miller questioned “how to . . .  reveal her spiritual journey in a way the audience will hear.”

← Saving the Future by Preserving the Past
Art Department Celebrates 30 Years of Relationships Through Creating →
Loading Comments...