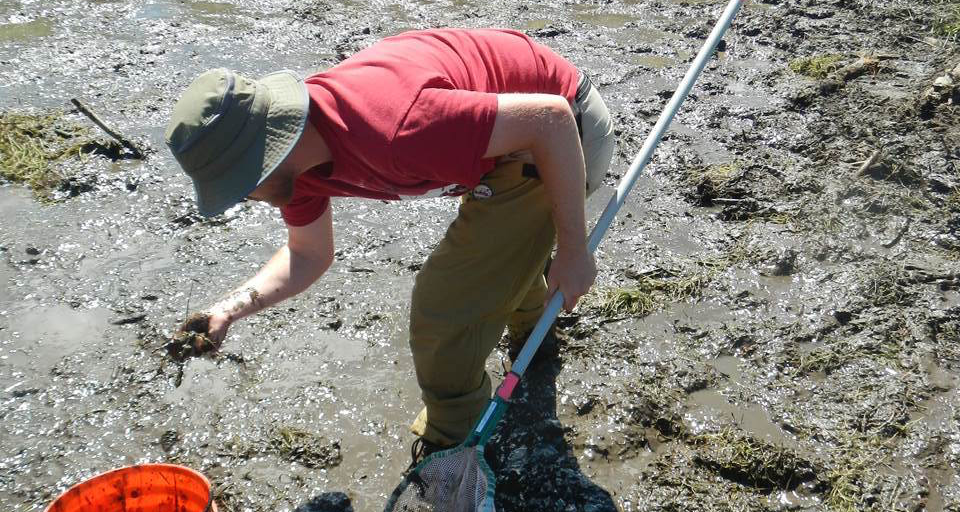 Surveying Streams and Wrangling Fish with the U.S. Forest Service

When Josh McLaughlin ’17 found himself face down in snorkel gear and a dry suit, plucking mussels from the bed of the John Day River in Oregon, he wasn’t simply taking a mud bath. He was restoring the ecology of Malheur National Forest and putting his biology major to work through a summer job with the U.S. Forest Service.

Working in the fisheries department, McLaughlin is collecting snapshot data on stream conditions. That information is used by the Forest Service for a wide range of purposes. “I’m collecting data that will help people higher up the chain with conservation and preservation,” he says.

Some of the data is used for planning roads, timber sales, hydrology and recreation. Josh explains, “There are logging operations that go on in the national forests, but there’s a lot of thinking beforehand” about where and how much timber can safely be removed. “There has to be a balance between using resources and conserving them,” he says.

Most days are spent in hip waders, surveying stream banks to gather information. “We’re going out into the woods, walking up a stream and taking measurements of the physical properties: width, water flow, what the plants are like, what the gravel is like and if it’s a good fish habitant, particularly for trout and salmon,” McLaughlin says.

He also watches for local species and invasive ones, like brook trout, a nonnative species that was brought to Oregon as a sport fish. “They out-compete the native bull trout, but now the Forest Service is actively working to contain them,” he says.

Another part of the job is restoring the landscape so that it can support native species. The local site in the John Day River previously followed a winding course through a valley, but was redirected into a trench dug by farmers who settled the land many years ago. Now the Forest Service, working with the Confederated Tribes of Warm Springs, is digging another, winding riverbed.

For that project, McLaughlin assisted in a two-day fish salvage. Workers used electroshockers to temporarily and harmlessly stun fish, which were then scooped out by people with dip nets. With nets spanning the river to corral the animals, workers removed fish and crayfish, and runners took them to be sorted, counted, recorded and released.

At the end of one day, 40 people stood in a reach (bend) in the river, pulling out brook lampreys, “which are the ugliest and cutest thing all at the same time,” Laughlin laughs. “I heard someone say there were 20,000 lampreys in that one reach.” Despite the river only being eight feet wide and eight inches deep in some places, he says that “there are so many more fish in there than you’d expect.”

McLaughlin’s passion for the work is evident when he describes his wrangling a few two- to three-foot-long early chinook salmon. “I’ve always loved being outside and learning about nature,” he says. “Gordon has helped me focus on a more conservation, sort of ecology direction. It’s been a long-term love and interest.”

To some, such detailed tasks may seem inconsequential at first glance. But for McLaughlin, the work is a key part of addressing the widespread need for ecological restoration, an idea he has kept in mind over the past few years. In a conservation biology course at Gordon and a summer at the Au Sable Institute, he discovered “how faith is applied” through environmental action.

Although the scale of the resulting problems can be overwhelming, McLaughlin says that it is essential to keep the big-picture problems in mind and remain confident of his potential for influence. “No one person is going to be able to fix all the problems in the world, but a single person can make a difference in their immediate sphere of influence.”