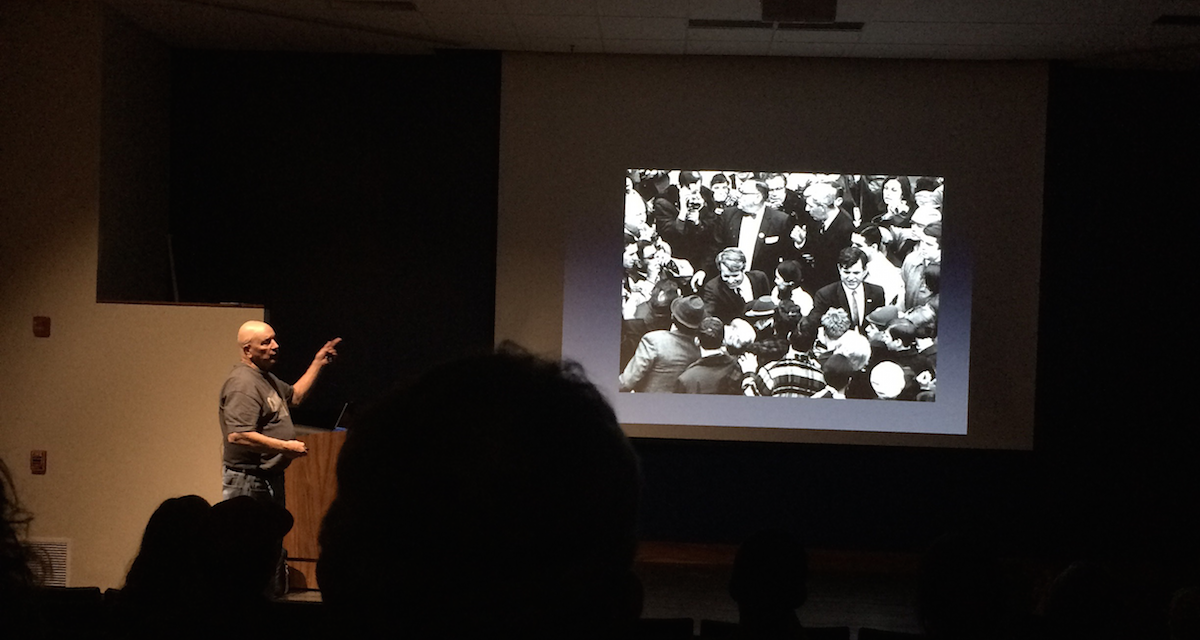 Gregory Auditorium was alive and buzzing with chatter minutes before 7 p.m. last Monday evening, when Stan Forman, winner of three Pulitzer prizes and former photojournalist for The Boston Herald, stepped up onto the stage and checked his mic.

“You don’t need to wait till the end to ask questions; just shout them out,” Forman said as someone fiddled with the lights. Soon the audience sat in the dark, staring at mostly black and white images slide across the screen. With a thick Bostonian accent, Forman narrated the stories behind each striking image—a woman standing on the ledge of a building crying, a fireman shimmying along the ledge to get to her and pull her into safety through the window.

Even 40 years later, he was still able to recall the names of burning building victims and crime scene policemen whom he photographed. And when he was unable to remember a certain avenue or last name, a former colleague from the crowd would shout it out. As the hour progressed, more and more of the audience members identified themselves as having worked with Forman, which made the presentation more of a reminiscing session, with Gordon students listening in.

Rarely do students get to hear firsthand from a photographer (and his covert colleagues) who had such open access to news stories. Forman got personal frames of robbery victims and inside ambulances. But he also said it was a different time, back then. After showing a photo from a Boston race, Forman added: “You weren’t on a platform, you went straight down to the finish line and took pictures. It was real.”

“The Soiling of Old Glory,” a capture for which Stan Forman is famous, shows a young man wielding a flag pole with the American standard pointing straight at a black lawyer. This picture was taken during the anti-busing protests in Boston, in April of 1976. But Forman did not know how powerful of a moment he had captured until he got back to his office and developed his film. While some of his photos depicted distressed, nameless jumpers, others were of strutting icons such as Mick Jagger and Jackie Onassis. The vivid pictures called people back to an age of photojournalism that was beautifully messy, involved and raw.