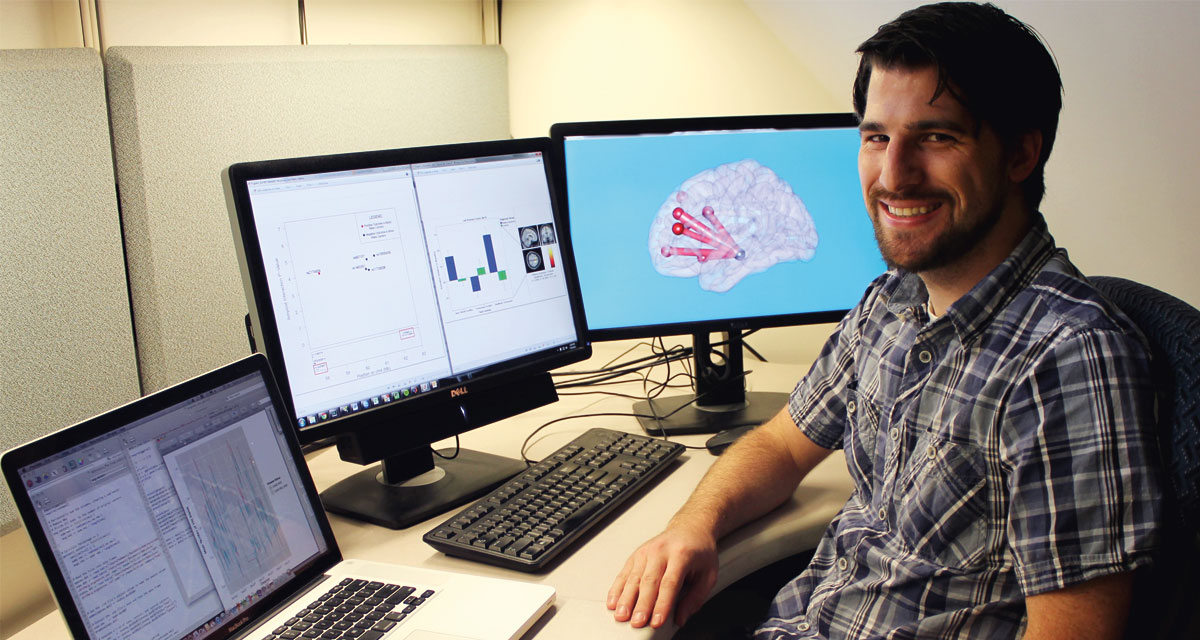 Posted on September 5, 2014 by collegecomm

It’s rare to choose a vocation in high school and make it stick, rarer still for the vocation to center on a disease of the elderly. But that’s Tim Hohman’s story. Volunteering in a veterans’ home during high school sparked his interest in Alzheimer’s disease; he arrived at Gordon set on a research career focused on the disorder; and now, at Vanderbilt University’s Memory & Alzheimer’s Center and the Center for Human Genetics Research, he is trying to pinpoint neurological mechanisms that appear to protect some individuals against the ravages of the disease.

“In the past,” he explains, “researchers were looking for which markers say who will get Alzheimer’s. I’m trying to figure out who can actually endure it without manifesting symptoms.”

That sounds counterintuitive; how can someone have Alzheimer’s and not manifest symptoms? Decades ago, evidence obtained in autopsies established that the brains of people who suffered from Alzheimer’s are riddled with tangles of the tau protein and fibrous plaques of the beta-amyloid protein. But more recently, researchers discovered the same is true of the brains of some individuals who never exhibited Alzheimer’s symptoms. In other words, after they die, neurological evidence proves they had the disease—but something blocked its effects.

Tim’s goal is to find out “how we can regulate the innate systems that seem to be operating in asymptomatic individuals.” He thinks neuroinflammatory genes may modify the association between the presence of Alzheimer’s pathology and the manifestation of clinical symptoms. By modulating the body’s inflammatory response, these genes may change the downstream effects of plaques and tangles, ultimately preventing clinical symptoms. Figure out how that works automatically in some individuals,
and you’re on the road to figuring out how to make it happen for others. A related, complementary study that made headlines in March examined brains post-mortem; by contrast, in Tim’s post-doctoral research at Vanderbilt, he uses neuroimaging to measure the pathology—the state of the brain—in living patients suffering from Alzheimer’s disease. “We look at genotypes derived from DNA which may nor may not have a mechanism that is localized in brain tissue,” he says.

Preparing for this work took Tim first to Washington, D.C., where he earned a master’s degree in cognitive psychology and a Ph.D. in cognitive neuroscience from American University. He interned at the National Institute on Aging, learning to model change in memory, and found computational research a good fit, with its ample theoretical component and its emphasis on programming.

Tim is married to Laura (Schweiger) Hohman ’06, a doctoral candidate in history at Catholic University in D.C., who teaches at two colleges in the Nashville area while writing her doctoral dissertation on early medieval sermons and religious culture, which she hopes to defend in the coming year. Together they lead a small group of folks from their church, and he leads another for men. A rescue greyhound rounds out their household.