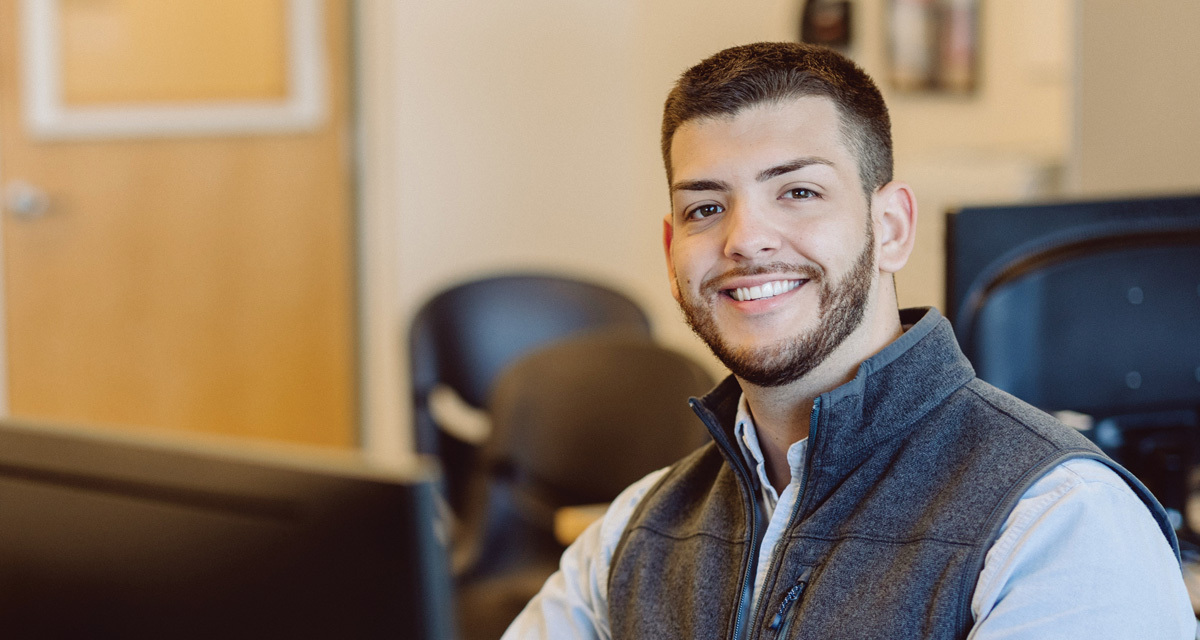 One of Matt Ramos’s ’22 first memories of arriving in the U.S. is of stepping off an airport shuttle bus and being greeted by a snow-covered Boston. He’d never seen snow before, having lived his entire life (all seven years of it) in Brazil.

“I remember my aunt picked us up,” he says, now 26. “She gave me a scarf, a winter hat and gloves from Gap.” It’s a happy memory, but like the snow covering the dirt and cracks on city streets
it conceals a harsh reality: although the Ramoses had reached the end of their 4,600-mile journey that day, they were still immigrants who now had to build a new life from scratch.

Ramos’s initial obstacle was learning English. In the beginning, he didn’t know how to ask his first-grade teacher if he could go to the bathroom. And he didn’t know which English words to write next to the pictures of common household items on his ESL worksheet.

Still, by the time he was in high school, Ramos was an honors student and a varsity athlete. He became the ideal college candidate. However, as a non-citizen, he didn’t qualify for any federal aid. “On top of that, by my senior year I was already working full-time to support myself,” he says. “So, I thought the idea of going to college was out the door.” After his high school graduation, Ramos kept his full-time job at Sprint (now T-Mobile). He got promoted to store manager and started attending conferences, where he first stumbled across the world of accessible tech. “I would always feel my heart being pulled during accessibility trainings,” he says. “I’d learn how someone with Tourette’s, who may have difficulty controlling their hands, could use their phone. I’d say to myself, ‘I’d love to be part of making software like that.’”

In those trainings, Ramos remembered the students with special needs he’d befriended in high school, after an administrator had asked him to help lead the school’s new unified sports program as part of a strategy to prevent bullying. Every day for two years, Ramos led a gym class for students with special needs and twice he volunteered as a mentor for the Special Olympics. In forming friendships with them, he not only made his school safe for those who’d been bullied for being different, he also found a passion for serving the special needs community.

Ramos brought that passion with him whenever he learned about new technologies, realizing that “a lot of the time, solutions aren’t inclusive,” he says. “People normally think of solutions that are going to help themselves,” which can create usability problems for someone with a different set of needs. To make a difference, Ramos realized he couldn’t wait to learn about these features after they went to market. He needed to be in the room where it happens—where teams make decisions about how software and hardware get made. To have a seat at that table, he’d need a degree in computer science.

Thanks to a private scholarship and years of balancing working full-time and going to school, Ramos is now finishing his degree in computer science—and is already using it for the greater good. In 2020, Ramos was one of three Gordon students to create the “wellness check” on the College’s community web portal where students and employees can report COVID-19 symptoms and track their safety status. The wellness check gives campus a visual method for seeing at a quick glance who’s feeling healthy, who’s feeling sick, and who’s in isolation or quarantine. “Without something like this,” Ramos explains, “it would have made it so much harder for Gordon to bring everyone back to campus during a pandemic. It really had an impact.”

This project also impressed the hiring team at Salesforce, where Ramos landed a solutions engineering internship last summer and was offered a full-time position in May after he graduates. Even though the Salesforce job is not directly related to accessibility or inclusion, Ramos knows that—like his Sprint job—it will bring him one step closer to influencing how new tech gets made and who it’s made for.

← How Small Details Have Major Meaning in the Book of Job
On-board With Abroad: Three Students Reflect on Their Unique Study Abroad Experiences During an Age of COVID →