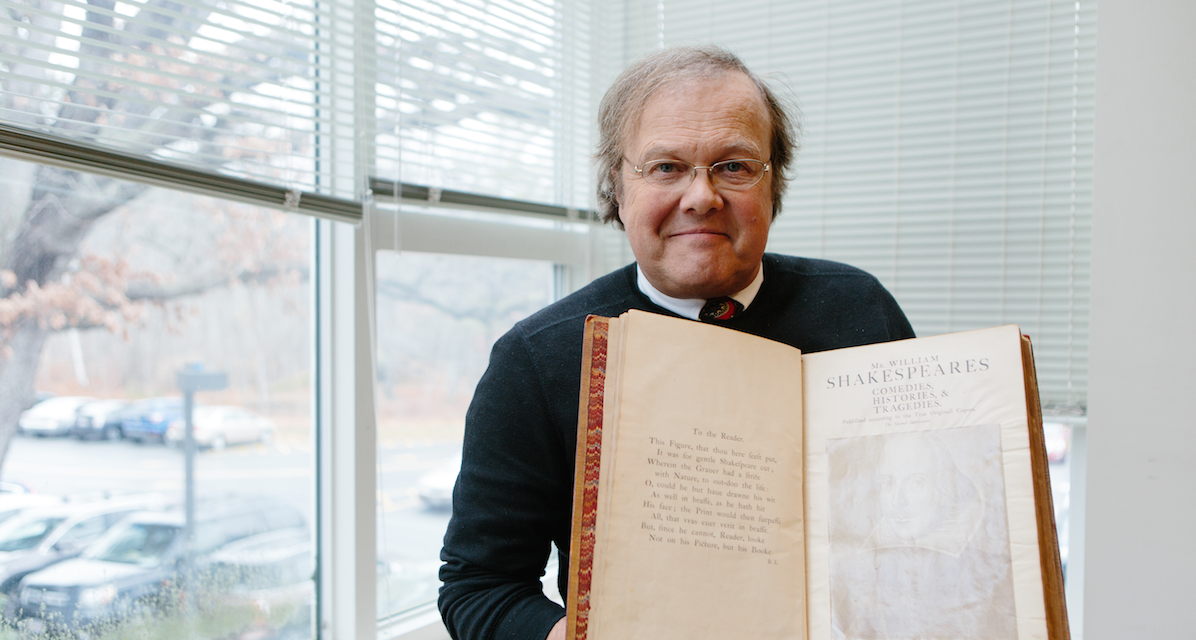 Posted on December 1, 2016 by collegecomm

It’s an ambitious debut for the Edward Payson Vining Collection, when this Friday, Dec. 9, selections of 16th- and 17th-century sources relating to Shakespeare will be featured in a special event marking the 400th anniversary of Shakespeare’s death. The exhibition, “Vining’s Shakespeare: Highlights from the Edward Payson Vining Collection,” will be on display in the Barrington Center for the Arts on the campus of Gordon College through Dec. 15, 2016.  The opening reception, which begins at 7 p.m., will feature theater artist Karin Coonrod one of the most acclaimed interpreters of Shakespeare in the country.

This exhibition, curated jointly by curator Mary-Ellen Smiley and French Prof. Damon DiMauro, is an exciting collaboration of Shakespeare’s works, Vining’s insights and the performing arts. “One of the important works that will be display is an original 1632 Shakespeare second folio featuring all of Shakespeare’s plays,” said David Goss, director of the Institute for Public History. “Though this is the first time the public will have the opportunity to view pieces from the Vining Collection, the exhibition’s most unique attributes is its diverse array of pieces that speak to the scholar, the artist and the patron of the arts.”

A secondary focus of the exhibition is the scholarly work of Edward Payson Vining and his personal Shakespeare writings on Hamlet. “He was known in his time for his theory that the character Hamlet was intended to be a woman,” said Goss. The exhibition will also feature an excerpt preview of a 1920 German film where the character Hamlet is performed by a female actor.

Though there is significant global excitement of Shakespeare’s works this year, having a Shakespearean producer speak on the personal influences Shakespeare has in the ever-changing world of theater provides a multidisciplinary experience to the exhibition’s opening. “Karin’s insights create a timeless-thread connecting the past to the present; the archives to the living stage; and our historical location of Massachusetts to the days of live-performances in the streets of Europe,” said Goss. Coonrod’s keynote talk will begin at 7:30 p.m. in the Cinema Room of the Barrington Center for the Arts.

Coonrod, serves on the faculty at Yale School of Drama, teaching “Directing Shakespeare” and is a 1976 graduate of Gordon College. In 2010, she was honored as Gordon’s Alumnus of the Year. Coonrod is the founder of two theater companies: the international Compagnia de’ Colombari, based both in Orvieto, Italy and New York City; and the Arden Party. Lauded by The New York Times as “prodigiously inventive,” Coonrod is an internationally recognized theater artist having directed productions at the American Repertory Theater, the New York Shakespeare Festival/Public Theater and the New York Theatre Workshop, among others. Her recent production of The Merchant of Venice in Venice, performed outdoors in the Jewish Ghetto of Venice itself, received international acclaim as an element of the commemoration of two milestones—the 500th year of the formation of the Ghetto, the area of Venice where Jews were forced to live under the Venetian Republic; and the 400th anniversary of the death of William Shakespeare.

“Vining’s Shakespeare: Highlights from the Edward Payson Vining Collection” is free and open to the public and will be one of several exhibitions of Shakespeare materials in the greater Boston area this season. The Barrington Center for the Arts is located along Princemere Drive on the campus of Gordon College.

For information on the Edward Payson Vining Collection and this anniversary exhibition, contact David Goss at the Institute for Public History at [email protected].