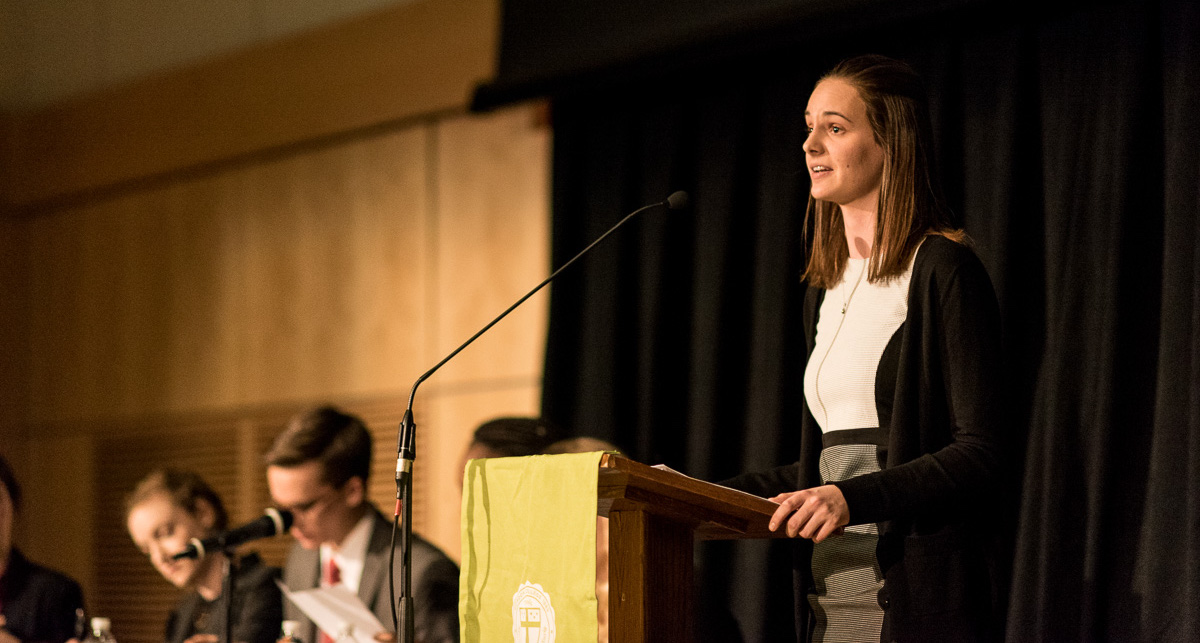 What does Jerusalem have to do with Washington, D.C.?

The annual Jerusalem and Athens Forum (JAF) debate has become something of a tradition here at Gordon. As a highlight of Symposium week for the fourteenth year, students who are part of JAF—a yearlong honors program dedicated to exploring the great books and big questions—were given a resolution to defend or invalidate. The affirmative team was given the task of upholding the notion that “The American ideals of ‘life, liberty and the pursuit of happiness’ are compatible with a biblical worldview” and the negative team was instructed to disprove it.

Each participant was assigned to one of the two teams regardless of personal preference, meaning many of the students argue for positions they may not personally hold. It’s a perfect premise, given that the purpose of the debate is not to be right, but to practice oratory—the art of formal, public speaking.

The inspiration for this year’s resolution came from an assigned reading in the JAF curriculum.

JAF co-director Paul Brink (political science) primed the audience for the debate by saying, “This question was posed by St. Augustine in City of God where he…. sorts out [our] dual allegiances, to the city of God and the city of man.”

With this framework, Jerusalem is representative of the Church, Athens is symbolic of the academy and Washington, D.C. is emblematic of the government—in this case, the American government.

For many of the students in the JAF program, this debate was their first. “I had no idea what to expect,” said Abigail Scott ’18 (English language and literature) of the affirmative side. “It was both a challenge and a joy to learn how to listen well and synthesize different opinions on and approaches to arguing the resolution. It was an incredibly formative experience.”

Taylor-Marie Funchion ’18 (psychology), of the negative side, shared her approach to the debate, which was drawn from a philosophy class she took as a first-year student. “[The] philosophy professor . . . talked about this idea of holding your beliefs in your hands,” she said. But “instead of having them held in a fist, opening your hand.”

In practicing this approach, not only did JAF scholars grow in public speaking skills, but also their capacity to listen and respond to opinions in opposition to their own—a skill that will lend itself to future scholarly work and their ability to engage with the world’s most difficult questions.

As Paul Brink said in his preamble to the debate, “Conversations concerning the relationship of our Christian identity to our civic identity are not uncommon here at Gordon. And, historically, this is true in Christianity as well.”