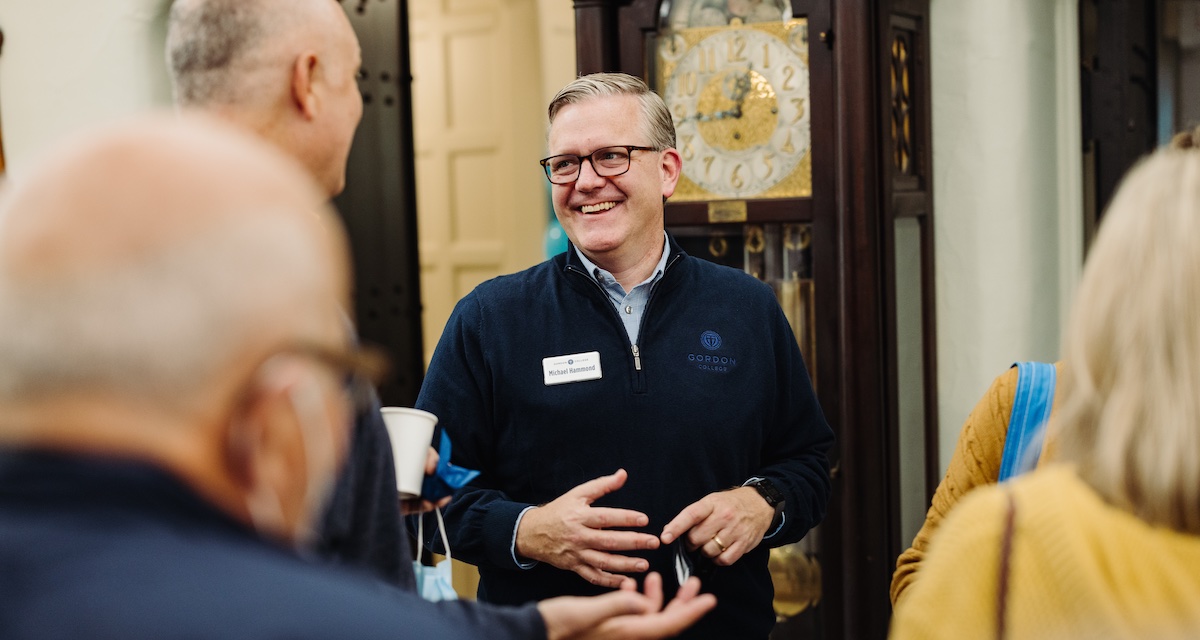 A version of this article originally appeared in the spring 2022 issue of STILLPOINT magazine.

Nine weeks from today, Dr. Mike Hammond will be formally inaugurated as the ninth president of Gordon College. The past several months of his tenure, which began on July 1, 2021, have brought two CCC championships, several guest speakers for a CCCU-sponsored forum on belonging, and the return of live performances for Gordon’s music and theatre departments. In this time, President Hammond has sent roughly 20,000 emails and logged about 1,300 hours in meetings, getting to know the Gordon community—while still managing to set aside time to explore the North Shore with his wife, Jen, and four high-school daughters while the oldest two children are away at college.

Many have met President Hammond through on-campus and virtual events or have heard updates from him over email and social media. More will meet him this spring as he embarks on an alumni tour. But for those who haven’t yet tuned in—or who have and are eager to hear more—here are nine questions STILLPOINT asked Gordon’s ninth president in the most recent issue.

1. STILLPOINT: If you could snap your fingers and make one thing happen at Gordon, what would it be?
President Mike Hammond: There is an impressive depth of commitment to the Gordon mission from everybody I’ve met and talked to. The staff, faculty and students who are here have a strong sense of why God called them here. Right now in higher education, especially for liberal arts colleges, there are a number of challenges—the pandemic, enrollment issues, changes in education. Sometimes the challenges before us can dampen our enthusiasm or cause us to forget the missional side of what we do. If it were ever so easy, I would love to resolve those challenges with the snap of my fingers so everyone can continue to flourish in this vibrant learning environment, where Christian discipleship is taking place alongside learning in the classroom. As president, part of my job is to help people flourish in the ways that they’re gifted.

2. SP: What are some of the common refrains people are sharing as you talk with them?
MH: Almost everybody I talk to tells me they’re here because of the students. The Physical Plant teams, the Dining Services teams, the professors all say that working with and serving students is what gives them a sense of satisfaction. There is a joy that comes from being part of the mission of this place. When we see students light up when they start to learn, when they start to grow spiritually, when their lives are transformed—those are the things that give us all energy. I love talking to people who have served here for decades and have seen their own lives shaped by students. They’ve seen God work in the lives of students and it makes a difference in their own spiritual journey. That’s been a great encouragement.

3. SP: As you get to know the Gordon community, what’s something you’d like the Gordon community to know about you?
MH: I don’t think there’s been a day on my schedule where I haven’t had one or maybe two hours devoted to sitting one-on-one with someone or in a small group. As I hear the stories of the people here, I relate. I think it’s pretty well-known that we’re a family of eight. We have two kids in college— it’s a change for them to be 800 miles away now. And we have four girls who are in high school—it’s a huge change for them. So, if you know nothing else, know that I wouldn’t uproot my family flippantly. Doing something like this has to be driven by a sense of calling. And to dig a little deeper, if we really believe in the mission, there is a spiritual aspect to this work. We are caring for human souls. We are not just churning out the economic engine of the North Shore of Massachusetts—there’s something bigger, something deeper. And I don’t think you should do that kind of work if you don’t feel called and committed to it. There is a deep and genuine sense of calling within the Gordon community, and it’s an honor to join that.

4. SP: What’s been the biggest learning curve over the past seven months?
MH: There’s really not much of a curve; it’s more of a brick wall and you’ve got to scale it. I’m thankful that the work I’m doing now resembles the work I’ve done in the last few years. I had a mentor once explain the interesting dynamic of this work: You may find yourself one hour in a highly charged budget discussion where everyone around the table is out of ideas and it’s frustrating, and the next hour you’re hosting a prospective family who has come from out of town and is interested in your school, and the next hour you’re giving a speech or talking to a class. Part of the learning curve is just managing all those different interests at the same time.

5. SP: What’s been the most surprising part of your Gordon journey so far?
MH: It’s been a real joy that I’m working side-by-side with my wife. We’ve spent entire days together meeting people and hosting meals during Orientation and Homecoming. It calls us back to when we were first married and working in residence life at another institution. I had a staff role, but we were both living among and engaging with the students together. A lot has changed since then. We’ve had kids and gone on to other endeavors. And I knew she would be part of my presidency (she has an official role at the College) but seeing that become a reality has been so fun.

6. SP: Any commentary on the transition from the Midwest to New England?
MH: I hear this question all the time, and it can be a bit pejorative. I think folks from New England may be surprised to find out we no longer drive horse and buggy in the Midwest! It’s an exciting place. Anyway, Jen and I have traveled to New England a couple times over the years, but we are realizing we had absolutely no idea about the North Shore of Boston. Half the time I feel like I’m in Colorado. Everyone’s got kayaks and bikes and they’re hiking and rappelling. I get to run on the beach every day. We’re 35 minutes away from Red Sox games. It’s a really special area and we’re just now scratching the surface.

7. SP: Do you have a favorite Lane meal yet?
MH: Every time I eat in Lane, I’m so impressed by the quality. We have amazing, gourmet-trained chefs. But I have to say that my favorite so far was the welcome lunch on my first day. It was New England themed, so we had Fenway Franks and lobster rolls. They did such a nice job, and it was such a celebratory way to kick off this new chapter in our lives.

8. SP: You have talked on a few occasions about the idea of “expectant hope.” What does that mean to you?
MH: One of the more important roles that any leader in any situation plays is to point toward hope. One of my mentors said this: Leaders absorb the chaos, provide calm and point toward hope. But I think it’s vital to define hope. There’s a winsome, roll-of-the-dice, shrug-of-the-shoulders version that would say “Well, we really hope this works out.” That’s not faith. Our hope is built on the idea that God walks with us, provides for us, and promises that he will never leave us or forsake us. When I think about pointing to hope, I’m pointing to that promise. We are all filled with the same Holy Spirit. There’s a unity in that, and it’s supernatural. And if we really believe it, we expect that God will bless this endeavor. So, my hope for Gordon in that context is that we thrive and flourish as we work to restore some of the best aspects of Gordon’s tradition, to foster trust, to cultivate joy. I expect that’s where we’re heading and it’s exciting to be a part of it.

9. SP: From your view, what makes Gordon, Gordon?
MH: There are a few things, and they draw from two main parts of our mission: faith and learning, and service and leadership. On the first pairing, we never fear difficult ideas. This isn’t a place where indoctrination takes place. It’s a place where we pursue exploration marked by our own sense of curiosity and sometimes our own skepticism. I believe that skepticism without curiosity breeds cynicism, and curiosity without skepticism is just lacking direction. We focus that skepticism, that curiosity, that exploration, and we do so in a way that models stewardship of the created world and the created mind that God has given us. Our Christian faith is what motivates us toward intellectual maturity—we read and study with confidence that our faith both roots and guides us. On the second pairing, service and leadership, we see the gospel lived. Only by serving do you truly understand the felt needs of the people who are around you. And only when you serve the people who are most in need, can you better understand the best solutions to help them. Faith and learning, service and leadership—this is how we choose the way of love in a world marked by incivility and conflict. This mission is a treasure.

✔️ Join us in-person or via livestream for President Hammond’s formal inauguration on Friday, April 29.

✔️ Connect with President Hammond and Gordon alumni around the country during the alumni tour in March and April.

← On-board With Abroad: Three Students Reflect on Their Unique Study Abroad Experiences During an Age of COVID
Confronting an Invisible Illness, Part I →