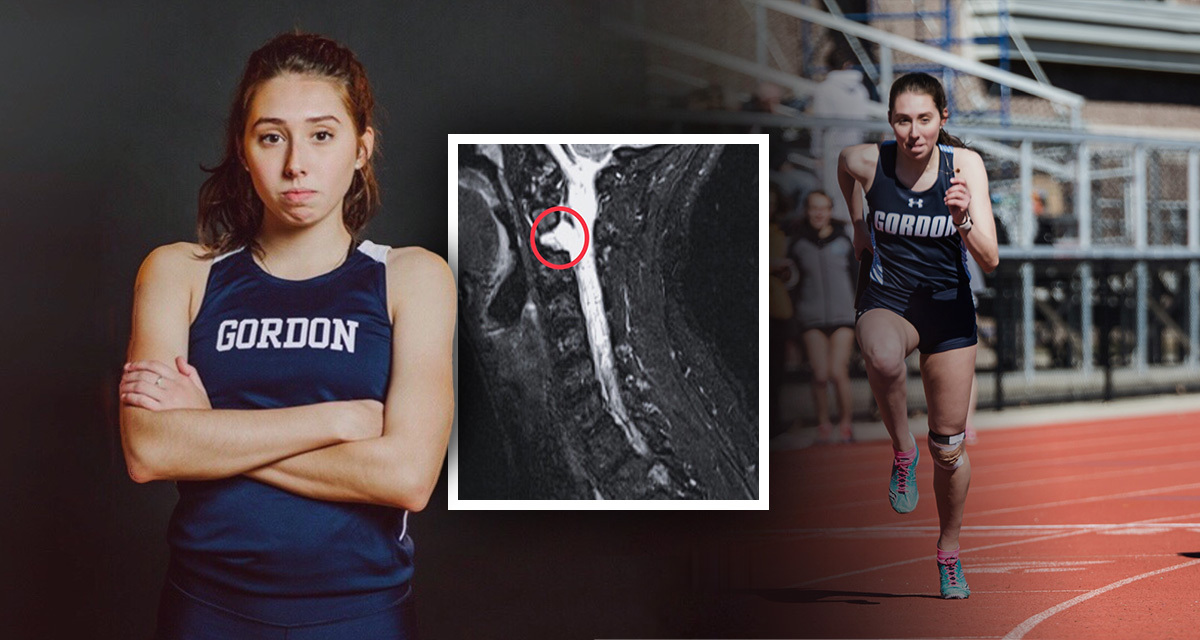 Confronting an Invisible Illness, Part I

In honor of Rare Disease Day 2022, this is the first article in a two-part series highlighting 2021 graduate Keanna Smigliani’s journey to identify her mystery illness: autonomic neuropathy/dysautonomia with preload failure and small fiber neuropathy. According to the National Institutes of Health, a disease is considered rare if it is affects fewer than 200,000 Americans, but Smigliani’s complex condition is under-diagnosed due to the difficulty of obtaining a diagnosis. Read Part II to learn more about how Smigliani found answers and now uses her experience to encourage trauma patients.

One week after running the best cross country race of her life, team captain Keanna Smigliani ’21 awoke to shooting pain down the right side of her body. “It was unlike any pain I’ve ever experienced,” she says. “It felt like lightning.” The pain brought the third-year student-athlete’s running career to an early finish and ushered in a new kind of long-distance race—getting a formal diagnosis.

For the past two years, Smigliani pocketed a business card at each medical office she visited. Thirty-five cards later, each one representing a physician without an explanation for what was happening to her body, Smigliani finally has a diagnosis—and a job at the hospital that found the answer, Brigham and Women’s Hospital in Boston.

Injuries became a common part of Smigliani’s active lifestyle when she started Irish step dancing and sports at age six. Doctors chalked up the tendonitis, dislocations and breathing difficulties to coincidences, asthma and anxiety. Because the diagnoses were inaccurate, the prescribed medications didn’t help. Smigliani didn’t think the issues were serious and certainly didn’t suspect they were all connected. But meanwhile, the issues—all symptoms of something greater—were inching toward their culmination in pain she could not ignore.

The onset of Smigliani’s shooting pain became concerning when rest was an insufficient solution and symptoms on her right side escalated. Within days, she was dropping objects and having trouble opening doors. The international affairs major couldn’t hold her pen steady in class and walking felt like wading through water.

Twitching episodes through her spine prompted the first of many visits to a sports medicine orthopedic and the first of many attempted remedies. Injections relaxed her muscles for about 24 hours, but when the symptoms were even worse and spread to the left side, the orthopedic sent Smigliani to the emergency room to screen for a stroke. Neurology testing appeared normal, but she was not permitted to demonstrate the biggest trigger—walking—because she was considered as fall risk. After scheduling a spinal MRI, she was discharged.

Her MRI revealed a cyst on a vertebra, though neurosurgeons could not prove it was the source. But without any other plausible answers, the cyst became the leading theory—though surgeons would not remove it due to its risky location beside the vertebra-basiliar artery and brain stem.

The proceeding months looked agonizingly similar: Concerning symptoms, repeated tests, no answers, confused physicians, an increasingly frustrated patient. “No one understood what was going on,” she says. “It was really hard to explain to a coach or a team or a friend what had happened because I did, on the outside, look completely normal. It was very frustrating.”

Meanwhile, she continued attending classes and work on campus through invisible pain. “I was not myself,” says Smigliani. “But I needed something to hold on to. I’m an athlete. I’m someone who pushes through anything.”

The exhausting routine of phone calls, referrals and appointments seemed to reach the point of futility. But Smigliani’s determined mindset pushed her to find new routes toward a diagnosis, which would lead to medical breakthroughs and hope for patients worldwide.

← 9 Questions for Gordon’s 9th President
Grazie: A Note from the Gordon in Orvieto Director →
Loading Comments...