Academics and Athletics in ACL Research

“One thing that I strive to do here at the biomechanics laboratory is to provide a service to our community,” says Dr. Jessica Ventura (kinesiology), explaining that the research performed there could benefit Gordon student athletes and patients at the Center for Balance, Mobility and Wellness.

One person who understands biomechanics from both experiential and academic angles is Chris Leavitt ’19, who plays on Gordon’s Baseball team and is studying kinesiology.

Biomechanics, says Chris, is “the study of how the body moves and the forces and physics behind that.” That knowledge can be used to prevent and treat injuries, which is what he and Dr. Ventura have been doing over the past year while studying the Anterior Cruciate Ligament (ACL).

The ACL’s location in the knee means that it is important for mobility and stability—and is commonly injured in athletic activity. To examine the factors that can cause injury, the researchers perform a risk assessment in which subjects—Gordon student athletes—complete physical tests. 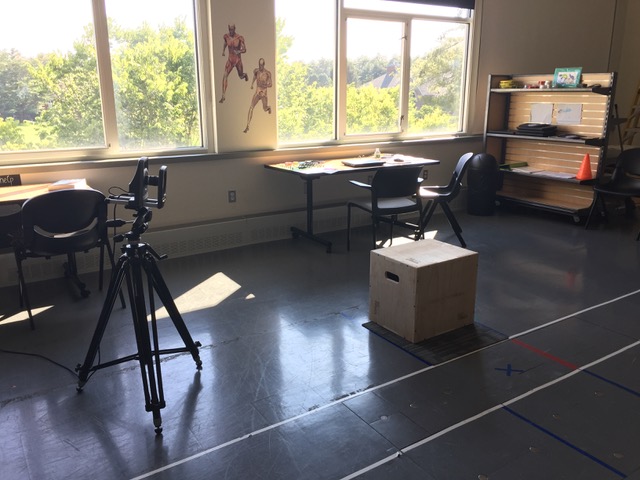 Tests include motions imitating sports maneuvers, says Chris, like “having people jump off a box or jump from one leg and cross over and land on the other leg. Those types of movements are commonly seen in sports like soccer and volleyball, and that type of landing can be pretty risky,” he explains.

“In the lab, it’s not risky because it’s very controlled and they’re planning it,” says Dr. Ventura, but “when it comes to the game day, they’re on a field that might have an irregular surface and have people running toward them. They’re not going to be paying attention to what they’re doing.”

However, that can be changed. “There’s a good indication that with proper training, certain risk factors can be reduced,” Dr. Ventura says.

“Last year we had two classes run by athletic trainers—one in the spring and one in the fall—and the trainers led attendees through exercises and gave them feedback,” she says. The classes were offered to female athletes at Gordon, and “after a 10-week program, the women who participated in the study had a decrease in the risk factors that we measured.”

Chris would like to make the training available to male athletes as well, and he recently proposed a new study, which is being evaluated for approval by the institutional review board. It would include both female and male athletes, and incorporate new risk assessment tests based on his research findings.

This type of research opportunity “is pretty rare at other schools,” says Chris. This summer, he and two other students, Samantha Morren ’17 and Vanessa Torres-Lacarra ’19, presented at the 2017 conference of the Christian Society for Kinesiology, Leisure and Sports Studies. Dr. Ventura says, “he impressed the professors from the other colleges. I was stopped a number of times and congratulated on my students.”

Those opportunities provide valuable skills for the future as well. Chris would like to be an orthopedic surgeon, and “the type of surgeries that I want to do are either ACL surgeries or rotator cuff surgeries,” he says. He hopes to come “full-circle one day, learning about all the factors going into ACL injury, and then being on the other side and helping people to overcome that.”