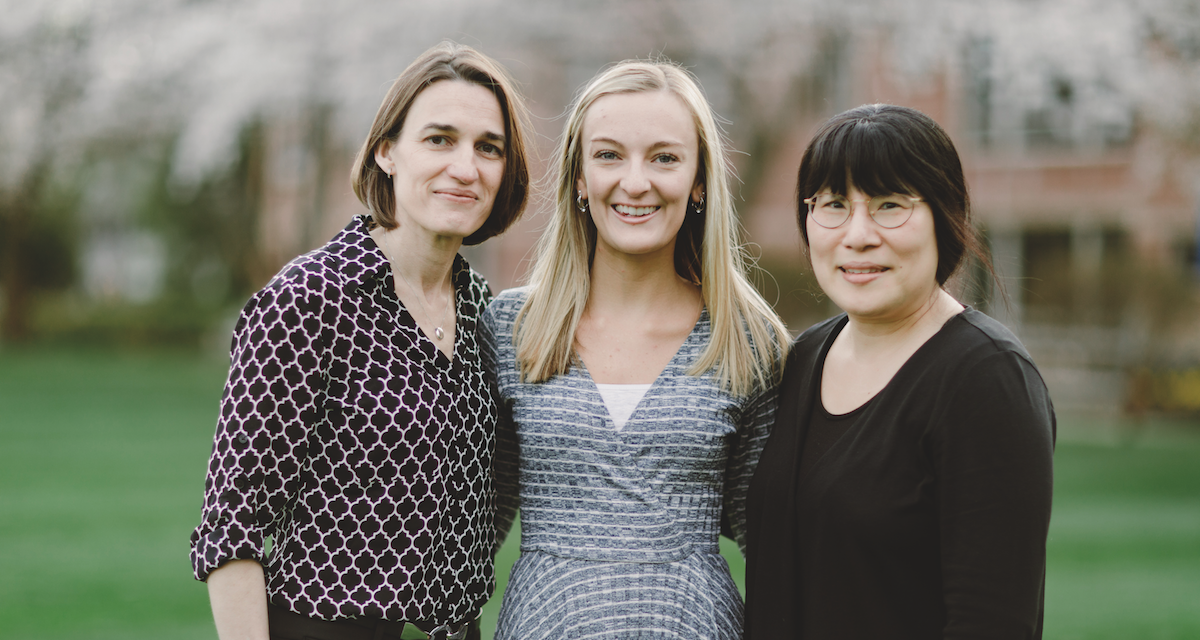 An Experiment in Multilayered Mentorship

Posted on October 9, 2018 by collegecomm

Editor’s note: Since this article was originally published, Spencer has moved her lab to University of Colorado School of Medicine and Children’s Hospital Colorado. Olbrich still works with her.

The research team stayed in Boston the night before to be sure they were on time to begin the experiment at 7 a.m. sharp. Sixteen hours and only a few 10-minute breaks later, they closed the doors of the Allergy and Inflammation Lab at Beth Israel Deaconess Medical Center behind them and headed back to Gordon. Road construction delayed their drive and narrowed the short window of sleep they’d get before returning to work.

But Assistant Professor of Biology Dr. Evangeline “Angie” Cornwell (pictured above, right) and Courtney Olbrich ’18 (pictured above, center) shook off the sleeplessness, poured an extra cup of coffee and slipped their lab coats back on. Why? “There are patients on the other end of it,” says Olbrich. “This is helping people.”

Cornwell and Olbrich work in the lab of Dr. Lisa Spencer ’95 (pictured above, left), assistant professor of medicine at Beth Israel Deaconess Medical Center, a teaching hospital of Harvard Medical School—Cornwell as visiting scientist and Olbrich as research assistant.

The team studies a type of white blood cells called eosinophils, which help fight infections. “They have roles in healthy people as well as in disease, and we don’t fully understand what their roles are,” explains Spencer. Her lab investigates the function of eosinophils in the rise of allergies, specifically food allergies.

The Cornwell-Olbrich-Spencer team met just a few years ago when Cornwell and Olbrich were both in their first year at Gordon as a new faculty member and first-year student, respectively. As a biology (pre-health concentration) student, Olbrich was searching for outlets to apply what she was learning in the classroom. As a new faculty member, Cornwell was searching for collaborative research opportunities. And Spencer was looking for Gordon students and faculty to join her research.

Thus began a multilayered mentorship of people helping people help people. “I’m mentoring my students,” says Cornwell of Olbrich and others, “but Lisa is also mentoring me, and then Lisa has had many mentors as well.”

“I encountered the same type of faculty devotion while I was there,” says Spencer of her time at Gordon. “I had many mentors at Gordon—that’s what made Gordon stand out,” she continues, citing Drs. Dick Wright and Russ Camp in biology, Dr. Jack Haas and Professor Irv Levy in chemistry, and Dr. Valerie Gin in kinesiology (“Coach Gin,” as Spencer, a former softball player, calls her).

For Spencer, these relationships were about integrating faith “straight through to every aspect—in and out of the classroom, on and off the field,” she says. “Being able to see people who are living out their faith in all aspects of life is empowering. You call upon those memories later on, when it becomes a little more real.” And today, “those connections continue to grow.”

Likewise, Spencer and Cornwell are modeling that same faith-in-action approach for Olbrich. “I see them both as mentors for different things,” says Olbrich. Spencer has modeled what it means to be “a woman of faith in an environment that’s very much non-Christian.” And “Dr. Cornwell really taught me all the basics of research. Had I not worked with her first, I would never have been allowed to go into Dr. Spencer’s lab,” she laughs.

Now Olbrich—who started in Spencer’s lab as a student intern funded through the Provost’s Summer Research Fellowship at Gordon, and was hired full-time as a research assistant after graduation—will mentor a new crop of Gordon student interns as well as graduate students and post-docs as they navigate experiments in Spencer’s lab.

“It’s really trickling down,” Olbrich says. “It’s a neat and unique experience for everyone that’s involved.”

For Olbrich, the work always comes back to the people—the ones who helped her, the ones she’s helping and ultimately the ones benefitting from the research. With a long-term goal of becoming a medical doctor, Olbrich says this stint in clinical research is helping her understand an important aspect of medical advancement so she can better serve future patients.

Between the research and the patient lie many papers, presentations and conferences. Earlier this year, the team published a paper about one outcome of their research: “We discovered a new subset of eosinophils in the small intestines,” explains Olbrich, “which plays a role in colitis and Crohn’s Disease and celiac and all these diseases that we are trying to figure out how to cure.”

They have also presented their research at the International Eosinophil Society’s meeting in Sweden; Sigma Xi (scientific honor society) meetings; the American Chemical Society conference; and the American Academy of Allergy, Asthma and Immunology conference.

“I see this as a way to better bridge the gap between academic learning in the classroom and actually being able to transition into being a productive member of the workforce,” says Cornwell. Spencer adds, “Mentoring is absolutely invaluable for their experience.”