‘Blood and Gifts’ Review: An Exploration of People at War

This fall, Gordon’s black box theatre brought audiences into the intense political and human experience of the Soviet-Afghan War of the 1980s. Blood and Gifts follows CIA operative Jim Warnock and America’s involvement with the Soviet Union, Pakistan and Afghan insurgent groups during the Soviet occupation of Afghanistan in the midst of the Cold War. 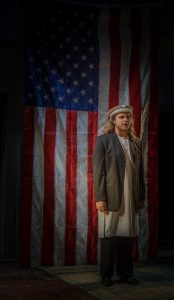 With colorfully carpeted floors and large sky-painted murals suspended overhead, the set design cast audience members in the role of an engaged, yet helpless observer. Much like the characters in the play, the audience could only stand by as the war took hold of the landscape and all who live within it.

At over two-hours long, Blood and Gifts gave the audience a lot to process, but—as a testament to the directing of Jeffrey Miller (theatre arts) and the performances of the student cast—the show never dragged. Instead, the script—originally penned by J.T. Rogers—thrives off its disarmingly human narrative and its illustration of the desperate, even futile, efforts of its characters to affect change in their wild and hostile environment.

The cast’s intense commitment to each of the languages and accents spoken (by the characters from Afghanistan, Pakistan, the Soviet Union and the United Kingdom) was evident. In preparation for the performances, they spent many hours listening to and practicing native Russian and Pashto dialects and also consulted international students, such as Asolia Zharmenova ’20—a Gordon student born and raised in Russia, just north of Afghanistan—and Iris and Rob Antonucci, friends of the College who have worked in Afghanistan for many years.

Jonathan Wacker ’18, playing Warnock’s Afghan ally Abdullah, and Daniel Lefferts ’18, playing Russian diplomat Dmitri Gromov, were two of the play’s many standouts—both for their command of the Russian and Pashto dialects and for the emotional complexity of their characters. As Abdullah, Wacker impressed audiences with his ability to express gentleness and intensity in the same moment. Lefferts’ performance as Gromov struck audiences with a teetering balance of charm and hostility, and his uproarious diatribes with Warnock were some of the play’s most memorable exchanges.

While each cast member had a role in communicating the play’s relational and political conflicts, it was Carl Kraines’ performance as Warnock that truly forced audiences to confront the many impossible, haphazard rationales for war. Kraines’ ability to transition from moments of dry humor, to sincerity, to sudden rage were captivating to watch, and made each scene feel tense and unpredictable.

By the time the play reached its chilling climax, the audience saw and felt the weariness that this war had instilled in each of the characters. In lieu of a redemptive ending, Blood and Gifts embraces ambiguity and grapples with the grey areas of war, leaving the audience to wrestle with what is right and just and merciful.