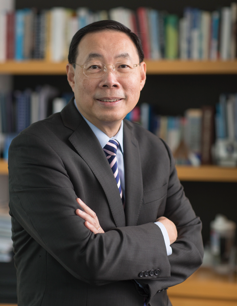 During the upcoming summer term, Gordon will welcome to campus Wai-Kwong Seck, CEO for all of State Street Bank’s Asia Pacific business, to co-teach a course with President Michael Lindsay in Gordon’s Graduate Leadership program through Gordon Plus.

Seck has significantly supported of Gordon’s presence in Asia over the course of the last three years, and recently joined the College’s Global Advisory Board in 2017. Because one of Seck’s greatest passions lies in teaching about leading change, Lindsay invited him to co-teach a graduate leadership course in summer 2018. Seck says he “gladly jumped at the chance.”

Currently splitting his time between Hong Kong and Singapore, commuting back and forth nearly every week, Seck also finds himself in Boston at State Street Bank’s headquarters. Previously, Seck served as the chief financial officer for the Singapore Stock Exchange among other senior leadership positions in the business and financial sector, including the Monetary Authority of Singapore and the Government of Singapore Investment Corporation.

Without the platforms afforded him by his engagement in the world of business and finance, Seck says, he could not advocate so fully for the development of ethical leaders though education—that passion for “leading change.”

“We can provide clean water, talk about fighting human trafficking—there are a lot of very good causes one can get involved in,” he says. “But I see education as a prime force in human development. I have always felt that education was important.”

Though he enjoys teaching in the standard university environment, Seck says that educating through a self-professed Christian institution resonates with him.

“In a secular environment, you can teach almost everything, but there’s a little gap there that I could not close,” he says. “And that gap can only be closed if you can actually see things holistically—including a spiritual dimension to what you are trying to do.”

As he considers how to best prepare students for the world, Seck notes how rapidly the world is changing. “The content of the knowledge we have now will not be all-sufficient for us for the future,” he says. “That is why we must instead train ourselves to learn.”

Lindsay and Seck will co-teach for one week, beginning July 19. And on July 19 in Boston, Seck will also serve as a guest speaker for the Finance and Faith Forum, an initiative through Gordon’s new Master of Science in Financial Analysis.