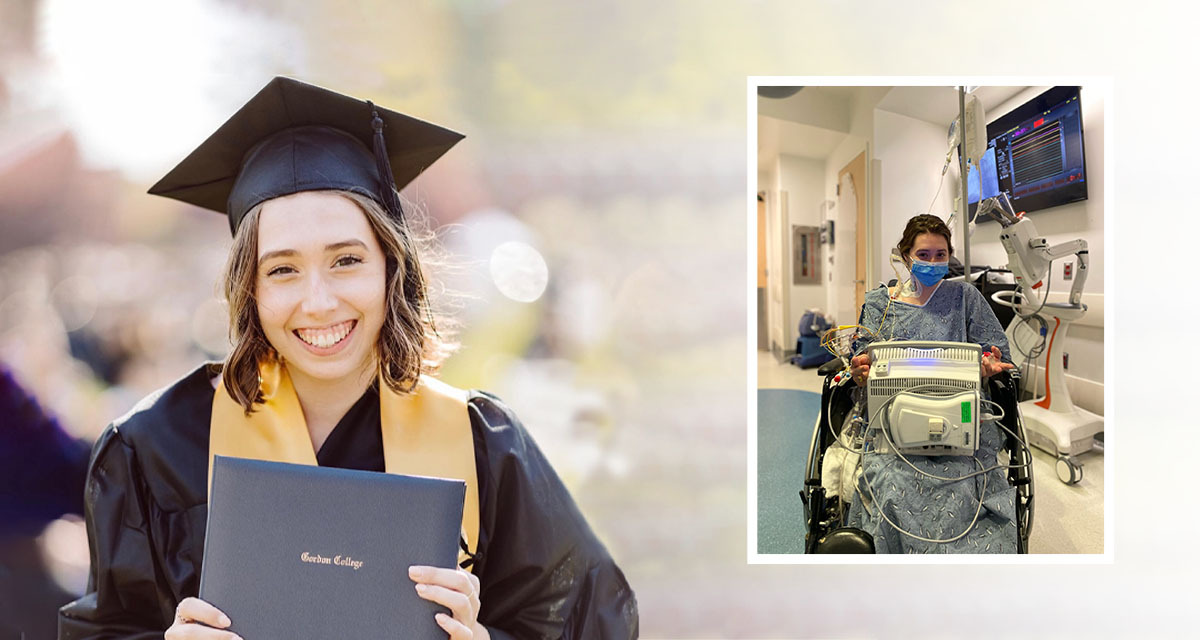 This is the second article in a two-part series highlighting 2021 graduate Keanna Smigliani’s journey to identify her mystery illness: Autonomic neuropathy/dysautonomia with preload failure and small fiber neuropathy. Read Part I >

Overnight, Keanna Smigliani’s lifestyle of cross country races and training was replaced by seemingly endless visits to physicians who couldn’t explain why walking suddenly felt like trudging through deep water. In search of an explanation for alarming and excruciating pain, the 2021 graduate grew increasingly frustrated as orthopedics, neurologists and neurosurgeons alike concluded, “We can’t find anything wrong.” “You just sound anxious.” “This is outside of my expertise.”

Paving Her Own Path

When Smigliani wasn’t sitting in waiting rooms or attempting to attend classes after restless, painful nights, she researched options and identified Massachusetts General Hospital as a promising destination. When, yet again, referrals and calls were met with silence, she decided to pave her own path.

Equipped with MRI results showing a cyst on her vertebra, she headed to Boston. Smigliani showed up at the emergency department of Massachusetts General Hospital and pled her case. Forty-five minutes after taking nerve blocker medication, Smigliani felt relief for the first time in four months. The relief confirmed nerve pain—one step closer to a solution.

A neurologist took Smigliani’s case right away and began a year and a half of investigating. Tests struck possibilities from the list: not multiple sclerosis, not this syndrome, not that syndrome. No diagnosis but progress—until every possibility was scratched out.

A book she came across while working on her international affairs honors thesis on trauma, The Body Keeps the Score, prompted Smigliani’s next lead. As she read how the body, mind and society suffer and heal from trauma, she noticed that each patient the author described sounded like her—especially those in the chapter on functional neurological disorders. She put her name on a waitlist with the author, Dr. Bessel van der Kolk.

On New Year’s Day 2021, she received a call—Dr. van der Kolk had reviewed her case and encouraged her to pursue testing for a functional issue. Within a couple of months, Smigliani was headed back to Boston to meet with a new neuroimmunologist, Dr. Shamik Bhattacharyya, at Brigham and Women’s Hospital.

She recited her well-memorized medical history, but this time, something felt different: “I felt encouraged in my research that there is something wrong and it is not just in my head. And I’m done having people tell me that it is.” She cried through her convicted explanation to the doctor, expecting the same response as the many before.

But Bhattacharyya said, “Keanna, I know what’s wrong with you.”

The Complex Answer to a Complicated Question

Extensive and occasionally painful testing over months confirmed Bhattacharyya’s theory and more. Smigliani was diagnosed with autonomic neuropathy/dysautonomia with preload failure, along with small fiber neuropathy, three types of vein malfunctions and an autoantibody that fights the nerve-muscle connections in the body.

Smigliani explains the foreign terms and that have become intimately familiar: autonomic neuropathy/dysautonomia is a dysfunction of the autonomic nervous system, which deals with functions that you don’t think about, like digestion, breathing and blood pressure. Preload failure is inadequate blood return to the heart caused by the failure of the autonomic nervous system to correctly send and receive signals to the cardiovascular system. Small fiber neuropathy describes nerve damage of the skin, causing her sparking, tingling and numbness. The three types of vein malfunctions indicate a massive decrease of blood pressure and flow with exercise, likely due to autonomic dysfunction. And just two weeks ago, Smigliani tested positive for an autoantibody that fights the nerve-muscle connections in the body that may be the “why” behind it all.

Beyond a diagnosis, Bhattacharyya also told Smigliani she was not the only dysautonomia patient who got stuck in the system searching for an answer because their specific question—a perplexing set of symptoms—actually have multiple answers. According to Smigliani, dysautonomia falls into multiple categories: neurology, cardiology and pulmonology.

With her own team of physicians behind her— Bhattacharyya, cardiologist Dr. Arvind Pandey and pulmonologist Dr. David M. Systrom—Smigliani is confronting the reality of living with a complicated, invisible condition. She tracks her symptoms, receives liquid IV, takes the necessary medications, drinks 100 ounces of water per day and is learning to be patient with her body. Though physically limited, Smigliani insists on finding ways to make a difference in the medical industry and donated blood to a study on people with symptoms like her own.

“This very much made me who I am,” she says.

Now as a practice assistant II in the Division of Trauma, Burn, Surgical Critical Care and Emergency General Surgery, she assists surgeons and brings clarity and ease to patients who are wading through the same intimidating process she navigated. “You should not have to figure out an entire complicated medical system while you’re sick to get the care that you need,” she says. “I know what it’s like to be a patient, and I want to be the person on the other end that I wish that I had along the way.”

When a pushy patient demands answers and need to unload her fears, Smigliani responds with hard-earned empathy. “I’ve been her,” she says, “All I wanted was to be heard when I was going through it. My journey didn’t make sense for three years until I got a job where I’m applying all of it. And now I realize, maybe this was supposed to happen.”

Read Part I of Smigliani’s story >