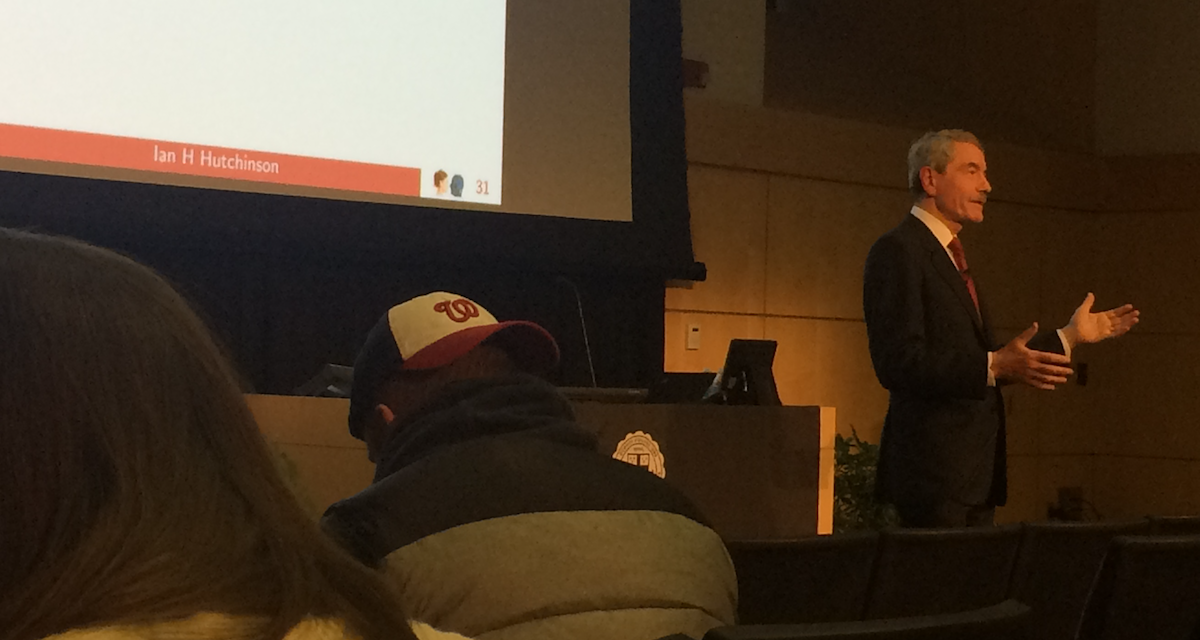 Made possible by the generous endowment of the Tak Yan Lee family, Gordon College recently welcomed back Distinguished Visiting Scholar Dr. Ian Hutchinson, professor of nuclear science and engineering at the Massachusetts Institute of Technology, to speak on the integration of faith and science.

Dr. Hutchinson is a popular speaker at the Veritas Forum and a frequent commentator on the topic of faith and science. He holds degrees in physics from Cambridge University and the Australia National University, and has authored more than 170 peer-reviewed academic journal articles as well as several books.

In his lecture, “Fusion, Faith and Science,” Dr. Hutchinson discussed the question of how Christianity and science fit together, if at all. “There is a picture drawn of the relationship between science and religion, generally science and Christianity,” he said, “that these endeavors are inherently at war with one another. And this viewpoint is very common in culture and the academy today.”

Dr. Hutchinson explained why this was false, citing that historical facts as well as observations from philosophical and sociological standpoints all seem to disagree with the widely-held belief that religion is at war with science. Christianity is, however, in conflict with Scientism, which holds the perspective that truth is comprised solely of scientific knowledge, he said.

Dr. Hutchinson eloquently pursued the question of what science is, and how it can be mistakenly turned into a worldview. The real tension, he argued, lies not between faith and science, but between the belief that truth comes from God and the conviction that scientific principles are the only dependable knowledge.

“I believe my Christian faith is fully compatible with science,” he concluded. “It has enriched my career and made me a better scientist. Like many historical figures, I think science leads to God.”