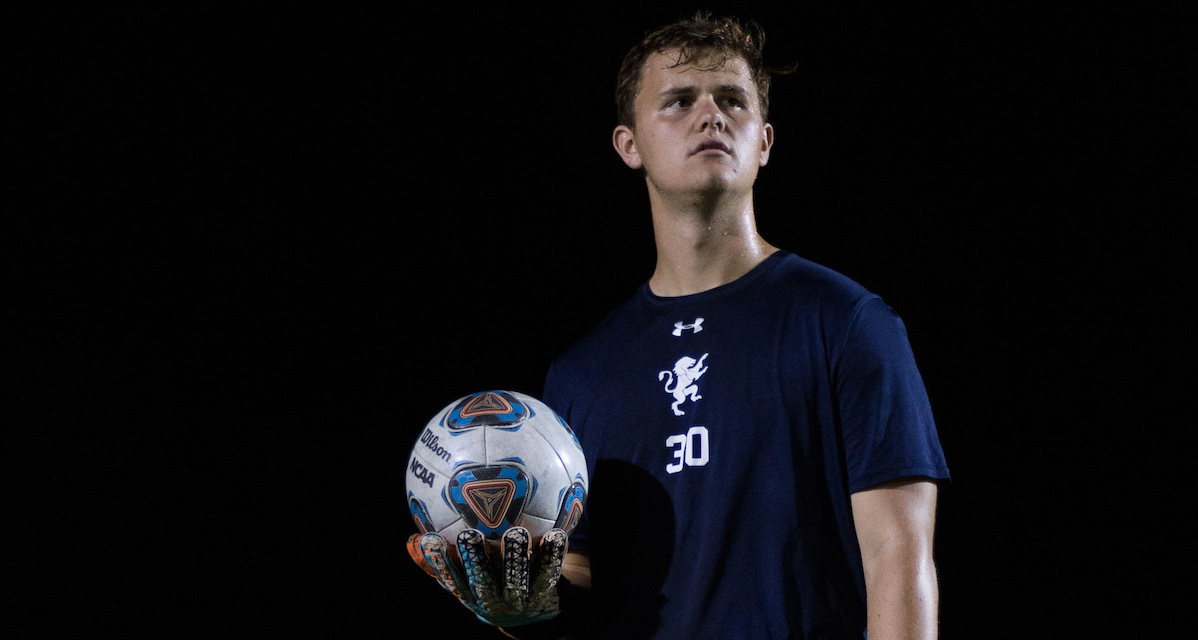 Posted on October 9, 2020 by collegecomm

“It was a cold night-game under the lights,” remembers Callum Owen ’22, who was in eleventh grade at the time. He was goalie that match, ready to throw himself between the ball and 192 square feet of net at a moment’s notice, conditioned to override any impulses for self-protection.

When a player on the rival team made a long pass over the heads of Owen’s defenders, the ball curved down toward Owen and the opposing forward. With the goal exposed, Owen headed the ball out of bounds a split-second before their heads collided and they fell, inanimate, into the grass. The unconscious forward was loaded into a blinking ambulance. Owen sat on the bench for the rest of the game. He didn’t realize he was badly hurt until he got home. That night, he sat in the shower for six hours with the lights turned off. Nothing was ever quite the same.

Between eighth and eleventh grade, Owen got four concussions from playing soccer. Each injury was followed by seven days of headaches, confusion and lethargy. By day eight, he was back to normal—until the fourth concussion. After that, Owen says, “I was much more emotional. One day, I got very irritated with my teacher when I was struggling to understand a concept in my calculus class. I’m normally a patient person, so this lashing out concerned me.”

During his junior year of high school, Owen started to have panic attacks and went through periods when he wouldn’t remember to eat, shower, comb his hair, brush his teeth or do his homework. He slept most of the time.

When Owen showed up to an appointment for bronchitis with bags under his eyes and scars on his arms, the family doctor knew it wasn’t just his lungs that needed treatment. He referred Owen to a crisis center. Owen stayed in the hospital for two weeks until his psychiatrist was certain he wasn’t a danger to himself.

Owen wanted to know if his concussions were responsible for the changes to his mental health. We know now, thanks to researchers at the University of Texas’ School of Public Health, that male athletes with a history of one or more concussions are twice as likely to attempt suicide and three times more likely to receive medical treatment as a result of a suicide attempt. But this research hadn’t been published yet.

Still “every psychiatrist and neurologist said they’d be stunned if there was no connection between those two things,” says Owen. “I’m never going to really know. There was no single factor. Mental health problems run in my family. Injuries likely made me more susceptible to it.”

Although the cause is still a mystery, Owen knows how to take care of himself now. As a Gordon student, that looks like taking medication, making use of Gordon’s Counseling Center, getting plenty of exercise and enjoying the great outdoors. “My mental health challenges helped me grow up,” he says. “It’s something I’m grateful for. It made me realize how much I need prayer, other people and knowing that the Lord is always there for me. He’s not going anywhere.”

After two years of playing soccer at Gordon, Owen is retiring from the sport, but not from the team. This semester he’s making the switch from goalie to team manager. He knows it’s important to respect his limits, especially if he wants to be ready for medical school and a career in emergency medicine.

Although Owen has a clear vision for his future and healthy rituals in place, depression and anxiety are still a part of his life. The battle—to get out of bed, or, on the worst days, against suicidal thoughts—comes and goes in “slow waves,” he says. Whether we share in Owen’s mental health struggles or wrestle with something else, rarely do any of us take on a challenge once and “win.” We often face the same problem again and again, not because we’re weak, but because it’s in relearning the same lessons that we eventually gain humility. Owen is proof of that.

COVID-19 may have canceled official Commonwealth Coast Conference fall athletic games, but Owen and his teammates are using the extra time in their schedules to commit to deeper levels of physical, spiritual and mental care.