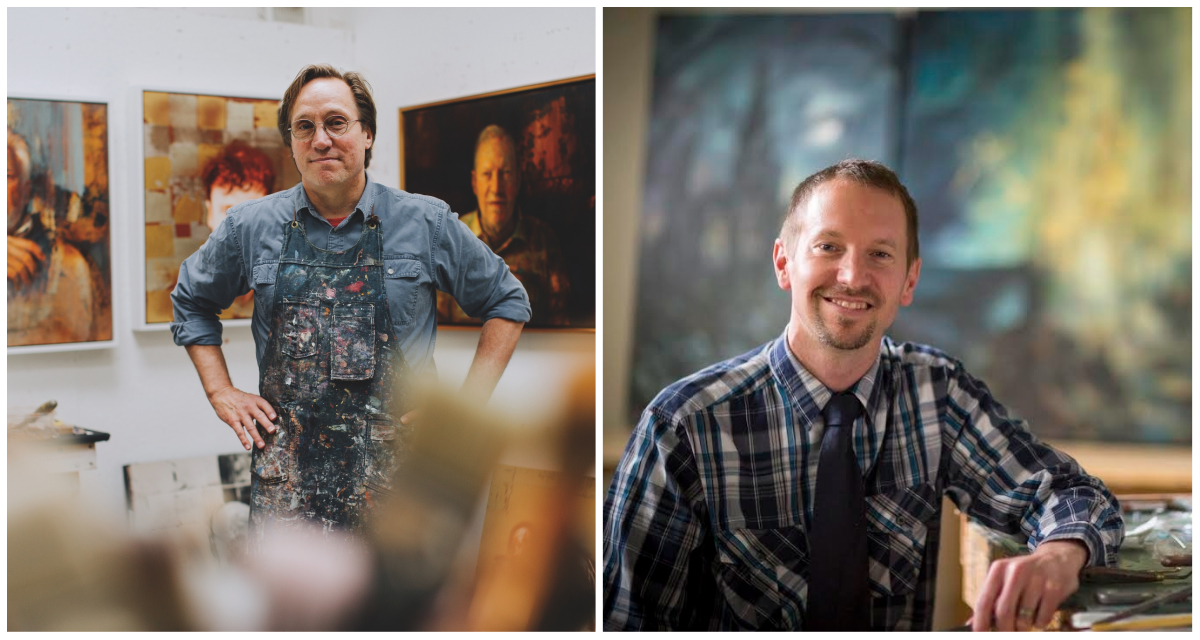 For the Craft and the Creator

Posted on October 2, 2018 by collegecomm

When Professor of Art Bruce Herman (pictured above, left) assigned his first-year students to sketch a human torso, his expectations were modest. But Bryn Gillette ’02 (pictured above, right) had other plans, returning to class with a seven-painting series inspired by the Book of Ezekiel.

“I was pretty blown away that a student—a freshman—would want to take on such an ambitious project,” Herman says.

“I went way over and above,” Gillette says with a laugh.

Twenty years later, the mentor and mentee are now both ambassadors of artistic knowledge—Herman as Gordon’s Lothlórien Distinguished Chair in the Fine Arts, in his 35th year on the faculty; Gillette in his ninth year of teaching, currently as a visual arts teacher at Charlotte Christian School in North Carolina.

Yet Herman and Gillette still find themselves pursuing the perennial question they discussed in their very first meeting following the torso assignment: What does it mean to be a Christian who is an artist?

As an art major and biblical studies minor at Gordon, Gillette struggled to justify the role of art in a world of suffering. “I want to do good in the world,” he recalls telling Herman. “I want to care for people, but I just see art in our culture so often as being for the rich and famous.”

The dilemma was one that Herman had encountered, too. He resonated with the earnest student, and their common endeavor sparked a meaningful connection. Herman attempted to model what he calls “righteous priorities”— instead of worshiping the muse, he says, an artist should align his priorities with those of Christ.

“You put your relationships first; you don’t put your art first, and the irony is that you do better art as a result,” Herman says. “If you get your priorities mixed up, you may attain some kind of worldly success, but what does that mean in the long run? We’re playing for much higher stakes.”

With Herman’s encouragement and a shift in perspective, Gillette continued to pursue art. “It was obvious to me almost from day one that Bryn was in a very small percentage of students who not only were very gifted, but also highly motivated, so I worked him over pretty fiercely,” Herman says.

Herman’s most poignant critique came when he challenged his naturally talented student to genuinely labor over his craft rather than to cavalierly and effortlessly produce nice work. “There will be a season of your life where you don’t just scatter seeds across the top and see what sprouts naturally,” Gillette recalls Herman telling him, “but you take the plow and you dig up this ground and go as deep as you can. And you plant seeds and you water them, and then you see what kind of harvest it produces. Only then will you really know what you’ve been created for.”

Convicted by Herman’s words, Gillette was again challenged to pay his due respect to art while earning a Master of Fine Arts. Over the course of two years he painted for nearly 40 hours per week, learning to be faithful to his craft. His capstone painting was of a farmer plowing his field.

“I remember sitting on my bed at one point . . . holding my newborn daughter, my three-year-old son running around, my master’s degree finished, with all these paintings about my family, and it hit me,” Gillette says. “‘Bruce called this.’”

Today, Gillette takes seriously his roles as a follower of Christ, husband and father. In addition to educating high schoolers, his passion for synthesizing art and faith has manifested in myriad ways—for example, in live painting, which he describes as “visual worship.” In settings like church services and concerts, Gillette prays, “Lord, what are you doing right here, right now in this space of time, and can I capture that?” Another outlet for his work is commissions, in which he captures spiritually meaningful themes to encourage clients.

A particularly significant project for Gillette was developing his Beyond the Ruins series to benefit Haiti, a country close to his heart. To raise awareness about its natural disasters and raise money for its restoration, Gillette produced 12 door-sized paintings that creatively depict the nation’s seven spheres of influence: government, religion, education, business, family, the arts and the media.

Practicing what he preaches, Herman’s most recent project, a series of portraits entitled Ordinary Saints, explores the liminal space between the artistic traditions of the icon and the portrait in what he describes as “a conversation.”

Although they no longer live close by each other, the two “Kingdom-hearted artists,” as Gillette termed them, remain in frequent communication to discuss everything from their careers to their personal lives.

“I think Bruce and I so resonated because I could see in him so much of my own future and who the Lord was calling me to become,” Gillette says. “He became an archetype who I could very easily follow because of who he was.”