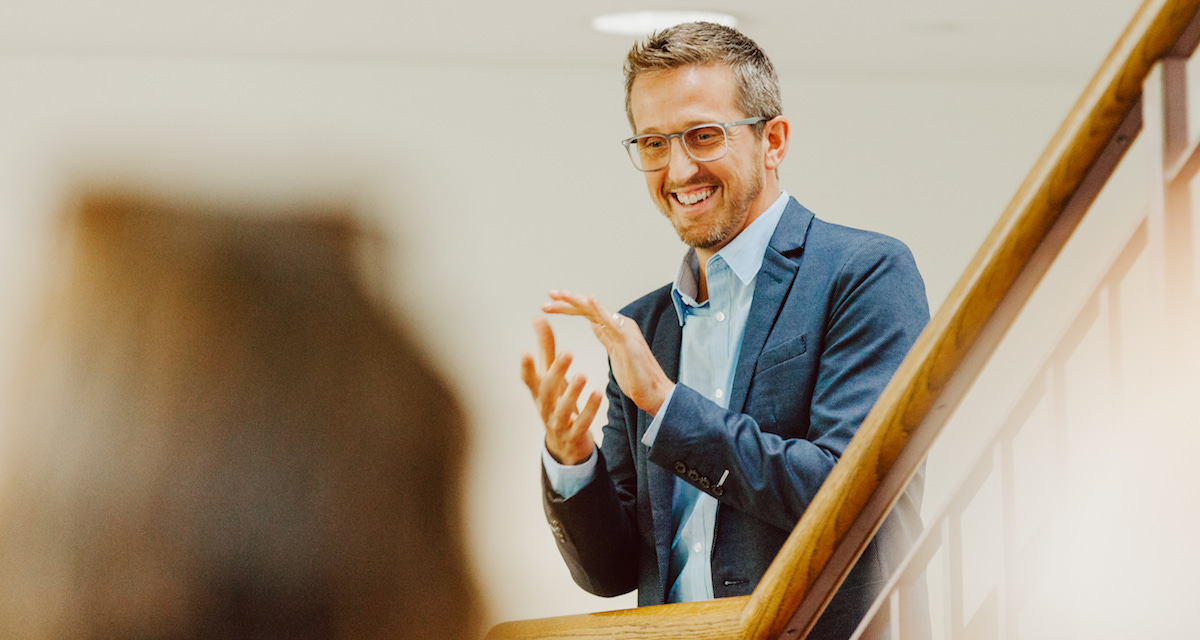 Posted on October 5, 2018 by collegecomm

From an enclosed garden to a fifth-grade band concert to a walk across river stones, Gordon faculty took listeners to a few familiar places to teach them something about the liberal arts, the Church and conforming to God’s likeness. In a series of TED-style Scot Talks taking place on Homecoming and Family Weekend, listeners received their fair share of surprising metaphors from Matt Doll (Gordon in Orvieto), Sharon Ketcham (theology and Christian ministries) and Sean Clark (kinesiology).

In a Scot Talk titled “Convento,” Matt Doll addressed a question he gets asked frequently: What is there to gain from living in a convent? Isn’t that where people go to escape the world?

To answer this question, he examined hortus conclusus, a Latin phrase translated literally as “enclosed garden”—denoting a private garden with walls around it. It—like a convent, a hospital, a liberal arts college—is not a place to withdraw from the realities of the world, but to gather with others, with the ultimate intention of venturing beyond its walls to serve those on the other side.

“We believe that the arts and humanities go hand-in-hand with all the realities of the world,” said Doll. “We need to con venire, to gather, meet and come together again, again and again. To make gardens in the core of our homes, our schools, our places in society, even when outside there is war, there is pain, there is suffering.”

In the United States, people are losing faith in the Church. Each year, according to the Pew Research Center, fewer people identify as religious. More people, explained Sharon Ketcham in her Scot Talk titled “Reciprocal Church,” are identifying as religiously-unaffiliated—known colloquially as the Dones, Nones and Spiritual-But-Not-Religious. And the religion experiencing the greatest share of the decline is Christianity.

Although Ketcham didn’t shy away from her own criticisms of the American Church, she reframed the notion of Church with a story about her son’s fifth grade band concert: “We are going to hear a song called ‘Wooly Bully.’ A 1960s hit,” she began. “It’s exactly the way you imagine. A little bit offbeat. The flautist decides to wave at the audience.”

Like most fifth-grade band concerts, the music was unrecognizable. But for just one second of a two-minute and 20-second song, Ketcham actually heard “Wooly Bully.” And, amidst the cacophony, she was insanely proud of her son.

“And I wonder: Might that be like our heavenly parent?” posed Ketcham. “Not with an expectation that we’re going to get this right, but, just for a moment—because we paid attention and we practiced—that we learned how to be a people [of God].” Maybe in God’s eyes, Ketcham surmised, we may do a bad job. But sometimes we get it right and God rejoices.

People shift gaze without thinking about it because it’s a familiar, involuntary movement. In kinesiology, this eye movement is called a “saccade.” By looking closely at the “saccade,” Sean Clark, in his Scot Talk “Looking Up,” provided a scientific illustration for the spiritual act of lifting our eyes to God. But why, Clark asked, do we shift gaze in the first place?

To answer this question, Clark invited Peter Iltis (kinesiology) to the stage to imitate what we do when we cross a river (in this case, a carpeted stage) by walking across river stones (a series of plastic squares). The audience was privy to exactly what Iltis was seeing via a pair of smart glasses with built-in eye tracking technology displayed on the screen behind him.

“What you might notice while Dr. Iltis is walking across the river stones is he’s typically looking one or two steps ahead,” said Clark. “He shifts his gaze to briefly fixate on the stones that he’s going to be traversing up to a second later.”