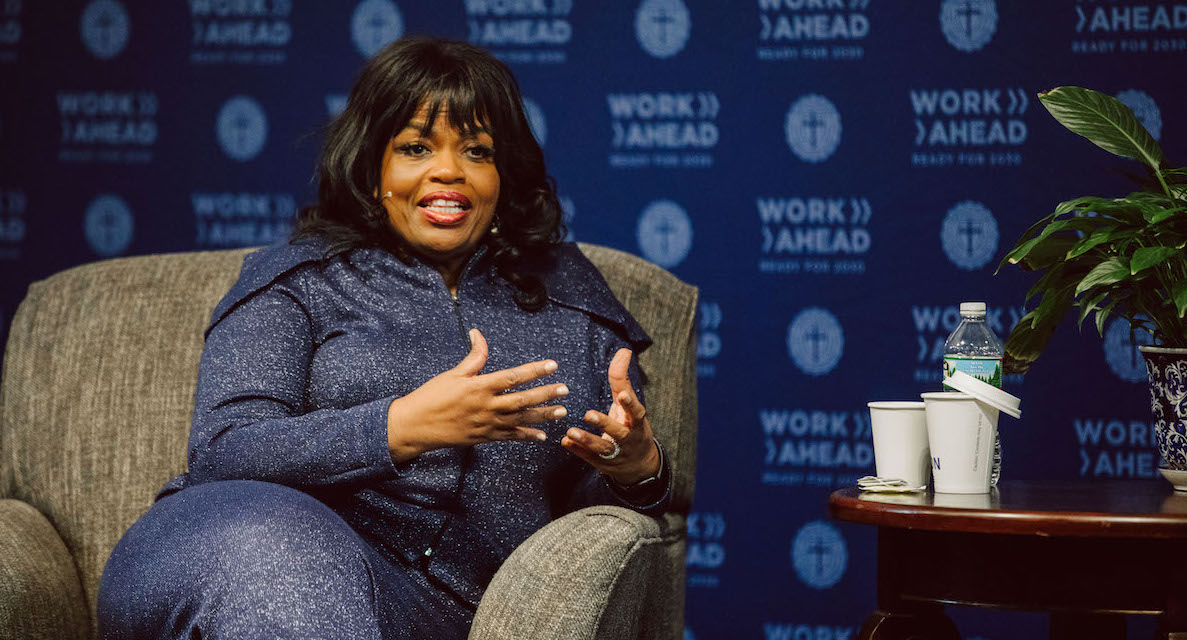 As a young girl Rosa Whitaker would ask her family, “Why can’t the government just make enough money for everybody and give the money away?” Even at the age of five or six, she sensed the injustice of poverty, and determinedly sought solutions.

The burden on Whitaker’s heart led her to become the first-ever assistant U.S. trade representative for Africa. Under the Clinton and Bush administrations, Whitaker notably helped develop the African Growth and Opportunity Act, which opens the U.S. market to the exports of participating African countries, contributing to economic opportunities for millions. Now she serves as founder and president of The Whitaker Group and was recently appointed as the president of Mercy Ships.

Yesterday afternoon, this champion for U.S.-African economic relations shared her wisdom with Gordon College as part of the Work Ahead: Ready for 2030 initiative.

During the “Conversation with the President” style interview, Whitaker—who divides her time between Washington, D.C., and her home country of Ghana—painted a full picture of the woman behind the accomplishments: her upbringing in a segregated area of Washington, D.C., struggles in school, pursuit of vocation and the story of God’s redemption continually refining her into an invariably peaceful, constructive and influential woman.

“I think you have to be gentle with yourself and to understand that you are going to make mistakes sometimes,” she said. “I look at it all as research and development. I don’t look at it as failure because every time I’ve ‘failed’ I’ve learned from it, and most of us who’ve succeeded, we are a product of a lot of missteps and failures.”

For Whitaker, living a life of impact was sparked by a distinct personal mission. But she encourages students not to be discouraged if vocation takes time and faith to discern; it’s most important to discover God’s purpose for your life, and that goes beyond a single job.

“It all starts with a call,” Whitaker said. “I really believe that we were all put in the world, given life for a reason . . . Seriously pursue that because I believe that nobody can beat you at what God put you here to do if you pursue it.”

Assessing the future landscape of work, she predicts major shifts in demographics—an increasingly diverse and aging workforce in America—in addition to a demand for natural resources and a rise in artificial intelligence. To be prepared for the changing tides, Whitaker says employees will need to be empathetic, flexible, agile, over-comers who think strategically, multidimensionally and globally, and who know how to navigate diversity.

“The world is going to demand a lot of strategic thinkers,” Whitaker said. “Whether you’re working for a large company or small, people want problem-solvers.”

Today, those employees (and employers) are students, and Whitaker urges them to seek out opportunities to learn in a range of venues. “You never know which learning opportunity will make the critical difference,” she says.

She predicts that many of those experiences for students will take place in Africa. With fast growing economies and emerging consumer markets, a young population and the mineral resources integral to the high tech sector, Africa is playing an increasingly major role in geopolitics.

Whitaker’s visit to Gordon was the second installment of the College’s new Work Ahead: Ready for 2030 initiative, which kicked off earlier this month in an event featuring Andy Crouch, partner for theology and culture at Praxis; Starbucks Chairman Mike Ullman; and Mary Beth West, senior vice president and chief growth officer at The Hershey Company.

First-year students will be 30 years old in 2030, and by some estimates, more than two-thirds of them will work in careers and roles that don’t exist today. Work Ahead will prepare liberal arts students for the future of work by offering direction as to what knowledge, skills and aptitudes are needed in order for these students to thrive in future workplaces.

The next Work Ahead event will take place during Homecoming and Family Weekend, which is happening October 4 and 5, 2019.

← Jason Russell ’04: Music and its Many Remedies
Christ’s ambassadors: “Deepening the Faith” devotional 17 →