In case you’re wondering what a day in the life of a NOAA policy analyst looks like, look no further; we’ve got the scoop.

“Today, for example, I will be answering questions from Congress on our FY17 budget, specifically questions on funding for a tornado project in the southeastern U.S., ocean acidification research in the Pacific and Arctic, and research on the impacts of climate on fish stocks in New England.” 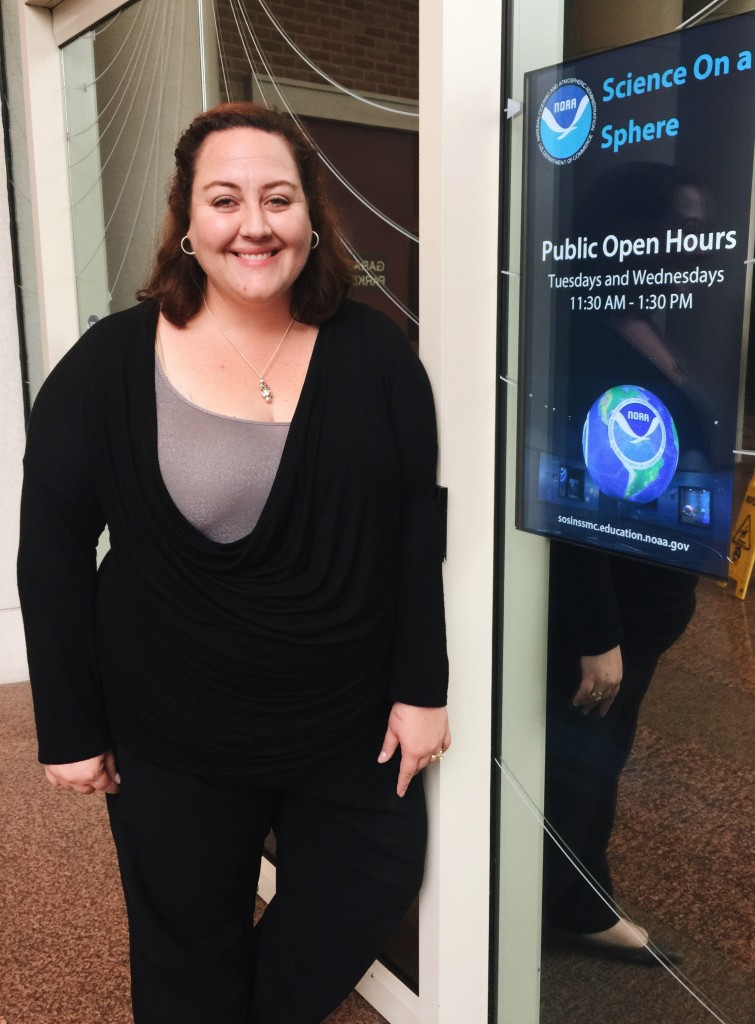 Melissa Pratt-Zossoungbo ’03 is a senior budget formulation analyst in the Formulation and Congressional Analysis Division of Oceanic and Atmospheric Research (OAR), one of five branches of the National Oceanic and Atmospheric Administration (NOAA). In short, she says, her job is “to translate the science our laboratories and programs are conducting into materials that can be understood by a non-scientist, most often Congress.”

Translation can also involve persuasion. When Congress proposed huge cuts to OAR’s climate research budget for the current fiscal year, Melissa wrote an appeal that was presented on the floor of Congress and ultimately halted the cuts.

“My science background is vital to understanding the climate, weather and ocean research going on at OAR, and to being able to write coherently and compellingly about that science,” she says. At this crossroads of science and politics, “I am able to see the science being conducted across OAR as well as all of NOAA, but I also get the interaction with Capitol Hill.”

A biology major (marine biology concentration) at Gordon, Melissa went on to earn a master’s degree in coastal sciences and marine botany from the University of Mississippi (Gulf Coast Research Laboratory). In between, she served for two years in the Peace Corps, in Benin, West Africa. Living in a small village accessible only by motorcycle, Melissa trained environmental protection agents in the protection of Leatherback and Green Sea Turtles and African Manatees. She also focused on the empowerment of girls by forming an environmental club and leadership camp.

Now she hustles through her days in Washington, D.C, advocating for research about the complex systems that support our planet. At certain moments—like searching for a recycling bin or washing her face—Gordon memories come to mind. “I am amazed that I can go to places in Washington, D.C., in 2016 and not be able to find a recycling bin. In 1999, Gordon not only recycled in every dorm and cafeteria, but mandated that people recycle. That is amazing,” she says.

“I read an article in STILLPOINT* several years ago. The author mentioned asking himself, ‘What would Dr. Boorse do?’ I ask myself the same thing almost daily. When I run the water to wash my face, I wonder if Dr. Boorse washes her face with cold water or lets the water run until it is hot,” Melissa says. “Gordon not only impacted my career trajectory, but my daily life.”

—
*Editor’s note: “What Would Dorothy Do?” was Installation 3 in Bryan Parys’ “Sporks” column, and appeared in the Summer 2007 edition of Gordon College’s STILLPOINT magazine. Responses from several people, including Dr. Boorse and her father, were published in “Letters to the Editor” in the subsequent edition. We asked Dr. Boorse for her most recent thoughts, nearly a decade later. Here’s what she had to say:

If I was a homeowner, I would invest in a better hot water heater, or an under the sink water heater, because some homes have really long pipes and the cold water runs for a long time before hot water comes out of the tap. I would make sure the pipes were well insulated.

If I was a renter or otherwise could not do that, I would heat a bowl of water in the microwave. The amount of energy and water used would be much smaller. When I have had showers that took a long time to get warm, I have often run a bath instead. The later very hot water heats the cold water already there, although it isn’t a perfect solution.

Another thing that you could do is do all of your hot water activities at once. Clean your tub while you run the water for a bath. Start dishes in colder water, and wash them as the water gets hotter. Wash your face after you’ve done the dishes.