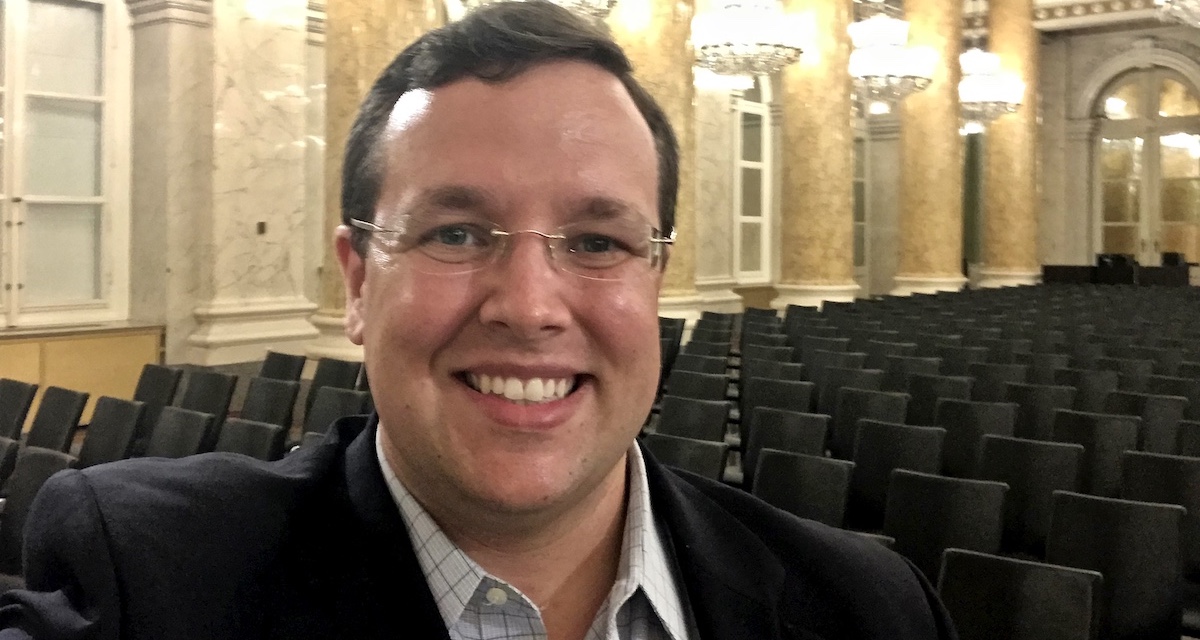 For Dr. Joshua Neumann ’05, the idea of beauty means anything but perfection. In fact, it is the unpolished discrepancies he seeks in his musical research. And this pursuit has earned him the American Musicological Society Thomas Hampson Award for research in classic song.

Neumann, who teaches at the University of Florida as an adjunct assistant professor in the Innovation Academy and affiliate faculty in the Informatics Institute, is studying German baritone Dietrich Fischer-Dieskau’s 15 recordings of Franz Schubert’s song cycle Die Winterreise (1828). Neumann’s work aims to establish how Fischer-Dieskau’s performances and their reception contributed to modern conceptions of Die Winterreise.

The Department of Music graduate developed methodologies to track individual creative processes in music performance during his time earning a Ph.D. from the University of Florida and a M.Mus. from the University of Nebraska–Lincoln. In this new project, he applies those skills to answer the question of how Fischer-Dieskau became perhaps the iconic performer of this song cycle.

“Given Fischer-Dieskau’s importance in performance practice history, and the reverence in which singers, pedagogues and performance studies scholars hold him,” says Neumann, “understanding how his performances of Die Winterreise evolved is imperative for understanding the cycle’s ongoing creative history.”

Deeper than the notes

In search of these hidden details, Neumann looks deeper than the words, notes and rhythm. One aspect of his project is to map the evolution of Fischer-Dieskau’s performance practice, particularly what Neumann terms the “expressive palette”—details like tempi, accents, dynamics, articulations and timbre (vocal color). Marrying music and science, Neumann uses audio signal processing and data science methodologies to identify changes across Fischer-Dieskau’s four decades of recordings of Die Winterreise, and, where possible, the reasons for those changes—recording capability, collaborating musicians, and both physical and personal development.

“In the differences from performance to performance are a reminder of our humanity and the individuality that we have as creative entities,” Neumann says. “Musical performance is still a living, breathing thing,” he says. “Even if the same person sang a piece back to back and did their best effort to keep it exactly the same, they would be unable to do that because we are human beings. Every musical experience is different . . . because humans are dynamic beings who are constantly in flux.”

Beyond audio analysis, Neumann’s work also entails ethnography and reception studies analyses, which will include conducting interviews with Fischer-Dieskau’s collaborators like legendary pianists Daniel Barenboim, Murray Perahia and Maurizio Pollini. And to unpack the reception of his performances, the Thomas Hampson Award will fund Neumann’s archival work in Berlin, Weimar and Vienna, where he will examine reviews and programs—how audiences and critics responded to the recitals.

With all of his quantitative and qualitative data, Neumann plans to publish a book geared toward singers and musicologists interested in analytical detail. He will also develop an educational online forum for students, singers and teachers to help them harness the artistic and technological skills that earned Fischer-Dieskau such reverence.

“Somewhat idealistically,” Neumann says, “my hope is that increasing both understanding and appreciation will empower anyone interacting with art song to enrich their own lives.”

Like Fischer-Dieskau may have pondered, Neumann says he constantly considers how to keep his own performances, research and teaching fresh—a principle he says is squarely rooted in feeding his faith, continually making discoveries and finding the image of God, “learning from every situation and from every person that I encounter.”

“This work matters because it focuses on the beauty of creativity and the diversity inherent in how humans express and engage it,” says Neumann. It is “very much about providing more tools for people to improve the quality of their lives, whether they see it in the Christian context of creativity being an important marker of the Imago Dei in all of us, or in a secular sense of separation from the rested of the creatures in the world.”