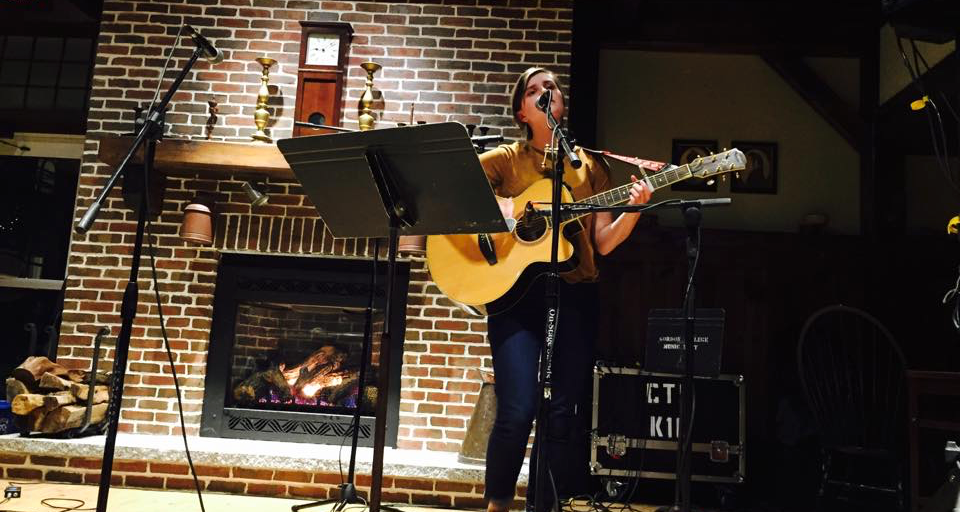 The day Rachel Baldwin ’17 was scheduled to sing and play guitar before 300 people as the opening act for singer-songwriter Livingston Taylor, she woke up with no voice.

With a bad cold, “I could not make a sound,” Rachel says. She sat in her room and drank lukewarm water. “I prayed and I was very silent.”

After hours of waiting, Rachel’s voice came back, and by the evening she was onstage at the Cabot Theatre in nearby Beverly. “It was definitely very nerve-wracking,” she says, but “I had adrenaline, and a different confidence than I would have otherwise had.”

The performance was a success. “This was the biggest thing that’s happened to me in my music career,” Rachel says. “The Cabot is really intentional about being an event space for the community, so the event manager wanted to promote a local artist alongside Livingston Taylor,” brother of the legendary James Taylor. 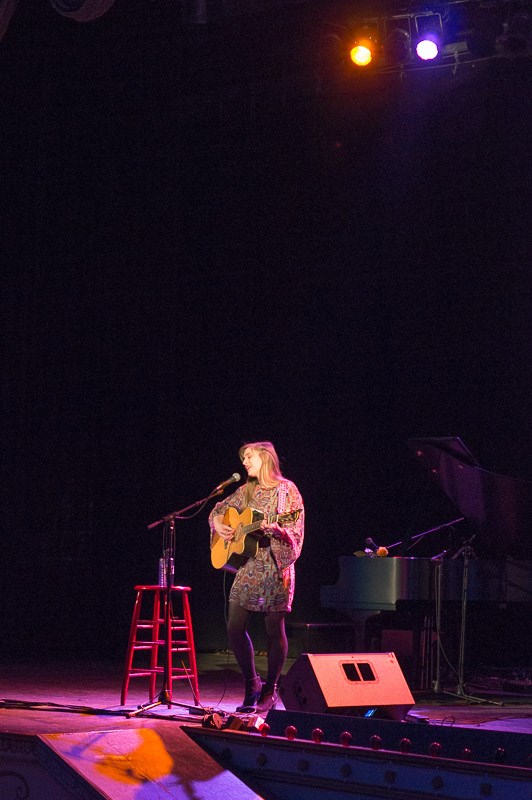 The experience “felt like a gift from God,” she adds. “I didn’t ask for that opportunity; I didn’t try for it.” It was “a good experience to encourage me and to challenge me.”

The event manager heard about Rachel after she played at a range of open mic nights during her sophomore year. She started with Gordon’s coffeehouse events, then branched out to local venues.

Rachel often writes songs with her guitar in hand. “I’ve always liked to write,” she says, and “being an English major at Gordon helped with lyric writing. I took creative writing with Mark Stevick and that was excellent.”

Before she started songwriting, Rachel played guitar as a worship leader. Living with her family as missionaries in Thailand, “I played guitar a little; I was self-taught and knew about four chords,” she says.

“The base that we lived on had two worship leaders who played guitar,” but one week, both were out due to illness and asked Rachel to lead worship.

“I was shaky afterwards,” she says, but “it was a good environment to start in because everyone was very encouraging. It wasn’t really about me.” She explains, “I’ve only had the success that I’ve had because of God. I feel very blessed that I’ve been able to do what I’ve done.”

Last spring, Rachel spent a semester in Orvieto, Italy, and regularly led worship for the first time since starting college. It was “a time of re-centering,” she says.

Rachel believes that music can provide a “worshipful way to connect to God, to his world, and to others. Music is so much a part of peoples’ lives and their identity, of how we see things.”

Rachel’s songs are available for free download on SoundCloud. “January” was written for her boyfriend to thank him for his support. On the night of the Livingston Taylor show, Rachel “surprised him with it onstage,” she says. The next year, she wrote a song titled “February.”

“I’m allowing myself to write one extra-sentimental song each year to mark my growth as a musician. Next year it will probably be about graduating or something cheesy,” she laughs.

Rachel adds, “I’ve been writing a little bit this summer. I have a friend who has a studio that I’m hoping to record in, so I can hopefully release a small album.”