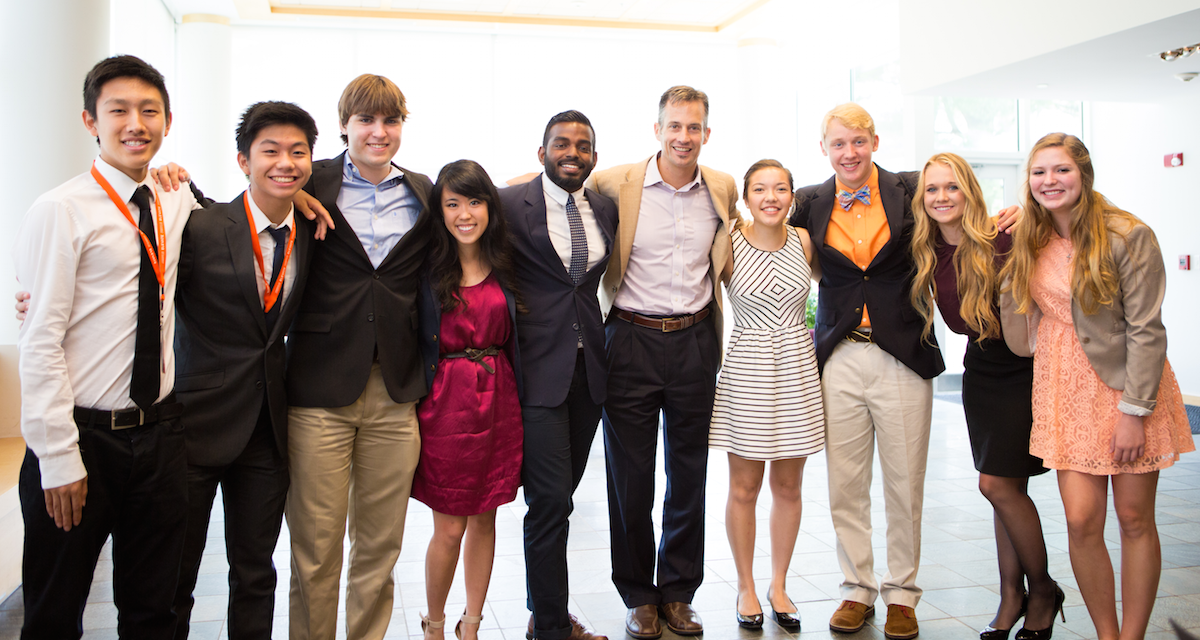 Elevate is a weeklong leadership institute for talented high school juniors and seniors. Held at Gordon each summer, the institute draws students from all over the United States and the world to develop their leadership abilities and gain tools to transform real social problems. Participants identify problems in their hometowns, create a solution with their team, and present their plan before a panel of judges. Winning projects receive seed money to get their ventures started. As Gordon gears up for Elevate 2016 (July 24–30), The Bell will feature stories of Elevate alumni who are using their entrepreneurship skills to make a positive impact within their communities.

When Colter Corish of Charlotte, North Carolina had the opportunity to participate in Elevate 2014, he was attracted by the program’s “objective-oriented” focus: “You’re actually learning to work out world problems. You get to meet people from all over the world.”

During Elevate, Colter’s team focused on human trafficking. He says Charlotte is a sex trafficking hub, but at first, he didn’t understand “the depth of the issues involved.” As the team dove into research they learned a lot, but opportunities to help seemed limited: “a lot of us were very young and it’s an extremely dangerous industry. We can’t really do anything to directly stop it.”

The team reached the status of Elevate finalist, an accomplishment that encouraged Colter’s efforts to combat trafficking at home.

“Coming back to Charlotte I felt like I had a place to start,” he says. Along with teachers and staff at his high school, he distributed applications for the Freedom Fellows, a group that would combat trafficking, using planning skills Colter had learned at Elevate. They started with sporting venues, which have become hubs for underground sex trafficking in many parts of the country. Through connections at their school, the group contacted Charlotte’s raceway and professional basketball and football teams, the Hornets and Panthers, to start an awareness campaign.

Colter says the sports connections “were very helpful and friendly. We also worked on developing a presentation that we could take to the marketing directors of these places. By the end of the semester we were also able to develop a 10-minute speech, our pitch idea.”

Although they planned well, the Freedom Fellows hit some rough spots along the way. Colter explains, “The organizations were willing to work with us but they had already set up their advertising for the whole next year.” However, challenges did not arrest the team’s progress. They have welcomed new members and remain active, even after Colter’s departure last fall to study at the University of Virginia.

“It’s been difficult stepping away this year,” Colter says, “but part of the end of last year was making sure the program continued as best it could.” This year, the group has continued to connect with sports venues while raising awareness at their school.

Meanwhile, Colter’s concerns about trafficking continue to influence his college and career goals. He’s studying entertainment media marketing, exploring “globalization and the effect on human exploitation through slavery.” Promoting justice is “definitely still a part of who I am and what I’m passionate about, and that definitely started at Elevate.”

After college, Colter plans “to market for nonprofits or organizations that are working for a more ethical world.” In the meantime, he’s looking for more ways to promote justice, and plans to volunteer at a local rehabilitation house for victims of labor and sex trafficking.

In whatever ways he may serve now and in the future, Colter’s motivation stems from his faith: “it’s not for myself, and it’s for God in the larger picture.”

Pictured above: Colter (third from right) with his Elevate team