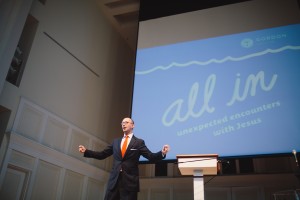 While thousands of Bostonians were dropping their ‘r’s and cheering for the “runnahs” in the 119th Boston Marathon on Monday, a group of fans at Gordon applauded a different type of sports star—the faith leader of the New England Patriots. Chaplain Jack Easterby, a dynamic speaker, kept his ‘r’s intact while slipping a Southern drawl into his rapid-fire Chapel message.

After a quick prayer for any Jets fans in the room, Easterby got down to business. He reminded the audience, “Just because I went to all those places [with the Patriots] doesn’t make me a football player. Just being in Chapel or being in church doesn’t make you a Christian. There’s something more, something deeper.”

In his “Masterpiece” address, Easterby explored the concept of deeper intimacy with Christ, weaving in several personal examples and at one point noting, “I’m bleeding on the carpet here for you to see my walk with the Lord and things that he’s challenging me with.”

Easterby drew from Ephesians chapter 2, likening the idea of believers being God’s masterpieces to our lives being poems written by him. Carrying the metaphor through his address, Easterby wrapped (rapped) by sharing a poem that he authored titled, “The Greatest Champion.”