This is the fourth in a series of seven articles featuring the research conducted by faculty members on sabbatical during the fall 2018 semester. A shorter version of this article originally appeared in the spring 2019 issue of STILLPOINT. Read more articles from this issue here: stories.gordon.edu/tag/stillpoint2019 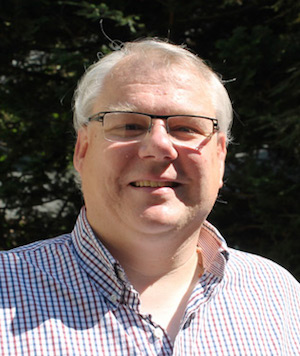 Michael Paul (chemistry) headed to the University of Georgia to conduct research in the lab of an award-winning chemist with 1,600 peer reviewed papers and over 67,000 citations to his name. Paul’s objective was to make progress developing small-scale fuel cells—batteries with the potential to transform the environmental impact of energy production.

“The technology [of fuel cells] has been around for a long time,” Paul says, “but it’s never been properly commercialized because of this issue with one of the reactions that happens within the fuel cells.” While fuel cells function on large-scale systems—some models of London busses, for example—it is difficult to create the proper chemical environment on a small scale.

As a computational chemist, Paul runs computer simulations from calculations in search of mechanisms that cannot (yet) be performed physically. For the fuel cell project, Paul built virtual nanoparticles using small amounts of platinum atoms combined with a water molecule to simulate the environment necessary for fuel cells to function. “Once you understand the reaction pathways,” he says, “then you can design materials which are going to provide better reaction pathways so the reaction proceeds more smoothly.”

Because fuel cells combine hydrogen and oxygen—therefore only producing water and minimizing any damage to the environment—these self-sustaining batteries are in demand. “In terms of climate change it would be really important to make these fuel cells work efficiently,” Paul says.