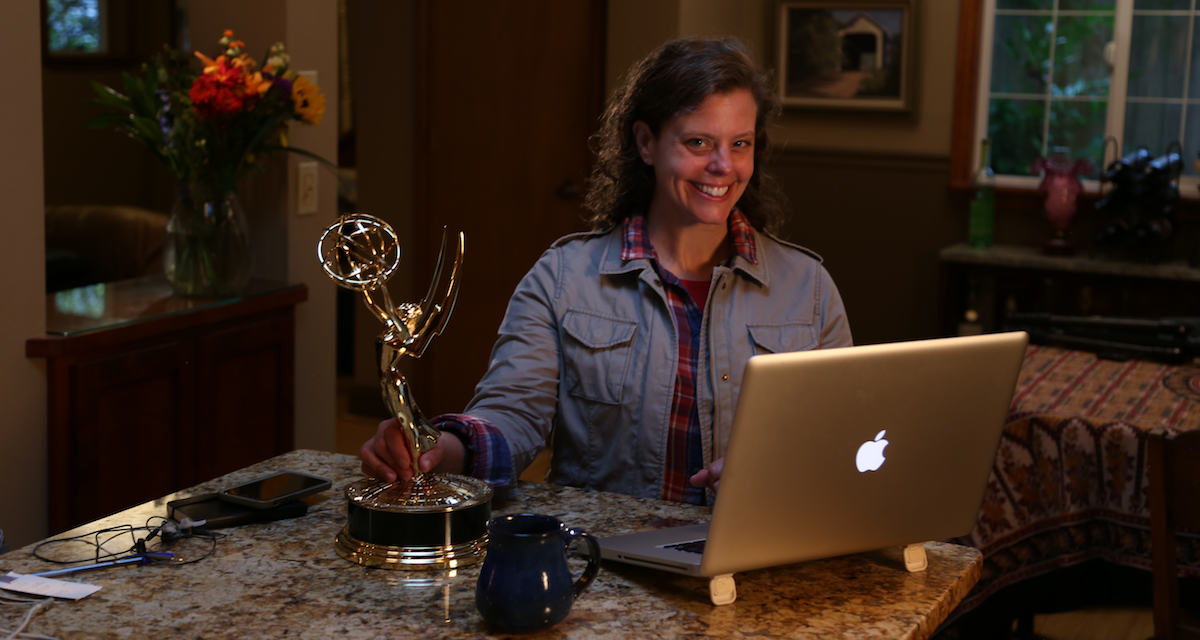 The freelance TV producer has worked on Creative Arts Emmy Award-winning gigs like the Super Bowl Halftime Show in supporting roles such as production manager or associate producer, depending on the project. But in 2017, it was her name on the Creative Arts Emmy for “Outstanding Creative Achievement in Interactive Media within an Unscripted Program” as supervising producer of The Oscars: All Access, the online experience to the Academy Awards main show.

Despite the glitz and glam of award nights, Shelby says it’s not so glamorous doing the work that earns an Emmy. The Creative Arts Emmy Awards honor behind-the-scenes folks for technical and artistic achievements in television. In a way, it’s an unsung hero award, honoring the people whose creative talent brings things to the small screen.

As line producer, Shelby manages the nuts and bolts of broadcasting a show—budgets, logistics, crew hiring and information dissemination. “The budget’s always a challenge,” she says of the shows. “Everyone has a million-dollar dream, and I have five dollars in the pocket.”

It wasn’t a direct journey from Wenham to Hollywood for Shelby, but rather a series of interests, relationships and opportunities that paved the way. The business administration grad became enthralled with the world of media during a summer internship with Trans World Radio on Guam. From there, her career snowballed and transformed from radio to television in a series of classes, internships and jobs. A Christian College Consortium program with Asbury College qualified her to work with the host broadcaster for the 1996 Summer Olympic Games. Another Gordon internship connected her to her first full-time job with CCM Radio, producers of CCM Radio Magazine and The CCM Countdown with Gary Chapman.

Shelby excelled in broadcast management positions. Because “the industry” in Hollywood is notoriously small, Shelby worked her way up and built a good reputation by working on TV shows like Foxworthy’s Big Night Out. It wasn’t long before she was working on her first Oscars.

When it was her turn to receive an award, Shelby was struck by the support of her tight-knit community. “Sitting in this audience. . . all of my bosses and my colleagues were there,” she says. “The lighting designers of the Super Bowl Halftime Show won and it’s like, ‘There’s my team!’ Even though one department might not have won an Emmy, there was still this sense of camaraderie and cheering each other on.”

“My lightbulb moment was really early in my career, and the rest has been a really cool journey,” she says. “Sometimes, I think, ‘Who am I that I get to work the Super Bowl and the Oscars and these other marquee names among real industry leaders?’ I’m really fortunate.”