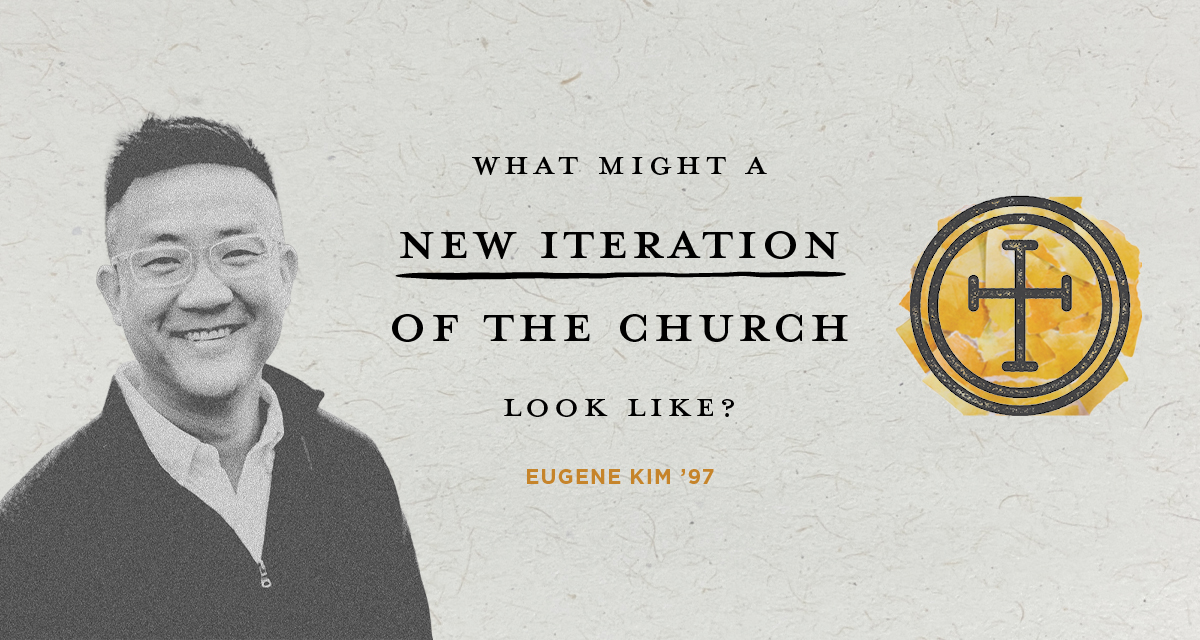 For the very early Christians, church wasn’t always a place you went to. It was sometimes just a group of people who wanted to follow the way of Christ together. There weren’t always formal creeds, church buildings or paid clergy. “Christianity was a new, grassroots movement that started in the margins and emerged to challenge the status quo,” says Eugene Kim ’97 (biblical studies). “These kinds of movements usually start out small, nimble and highly relational.”

Jesus wasn’t the first or last spiritual leader to start a paradigm shift in the bigger story of Christianity. Abraham introduced the ancient world to monotheism. Martin Luther advocated for a salvation based on grace alone. Jonathan Edwards, George Whitfield and John Wesley encouraged Christians to make their faith personal. Like its people, the Church gets reborn. Grassroots movements challenge the status quo, sometimes grow into powerful institutions, and then they too become challenged by the next grassroots movement, explains Kim.

Throughout his 25 years in church ministry, Kim took notice of trends in church attendance. Each year, fewer people walked through the doors of American churches. Many weren’t renouncing their faith; they were walking away from the current church model. “The current way of doing church is good for a lot of people, but I was always aware of all the people for whom it didn’t work,” says Kim. “All the people in our neighborhood who would never walk through the doors of an institutional church—they still want spirituality and community. They’re just less and less likely to look for them in a church building on Sunday.”

In 2020, Gallup confirmed what Kim had been observing. That year only 47 percent of U.S. adults belonged to a church, synagogue or mosque. In Gallup’s 80 years of tracking membership in houses of worship, this was the first time it dropped below 50 percent. Kim explains, “What you see is a steady line from 1940 to the late ’90s. Then right around the turn of the century, that line takes a downturn. When you look at the numbers for young people, that decline starts to look like a nosedive. It’s not a theological statement. It’s just math.”

Like the spiritual innovators before him who saw a church model in need of rebirth, Kim asked, “What’s next? What’s the next iteration of Christianity going to look like?” To answer this question, Kim left his role as pastor, underwent a two-year investigation into ecclesiology and founded New Wine Collective (NWC), the nonprofit seeking to build an online platform that will empower people to create their own spiritual communities wherever they are. Like the current American church model, NWC hopes to provide structure for spiritual gatherings but in a way that retains the nimble and highly relational nature of grassroots movements. Kim doesn’t see NWC’s app as a replacement for the traditional church model, but as a potential alternative for the 53 percent of U.S. adults who want something different.

Still in its prototype phase, NWC’s app is designed to help groups gather around a clear purpose, make community agreements, and have access to a crowdsourced library of content that they can contribute to—not just consume. “It’s about moving from an emphasis on content to an emphasis on connection, putting love and relationships at the center and designing church around that,” explains Kim. “I like a good sermon as much as anybody else,” he says, “but I rarely experience transformation through them. We’re hardwired to be formed primarily through relationships. Our app will simply help create a container for social and spiritual belonging, where people can become more like Jesus.”

Kim emphasizes, “I’m not interested in tearing anything down. I think the traditional programmatic church still works for a lot of people.” As part of his work with NWC, he’s also invested in helping existing churches shift from an emphasis on content to connection—“less sitting in rows facing forward and more gathering around dinner tables, conversing face-to-face,” he says. “I believe what spiritual community is supposed to look like is all there in the life and model of Jesus.”