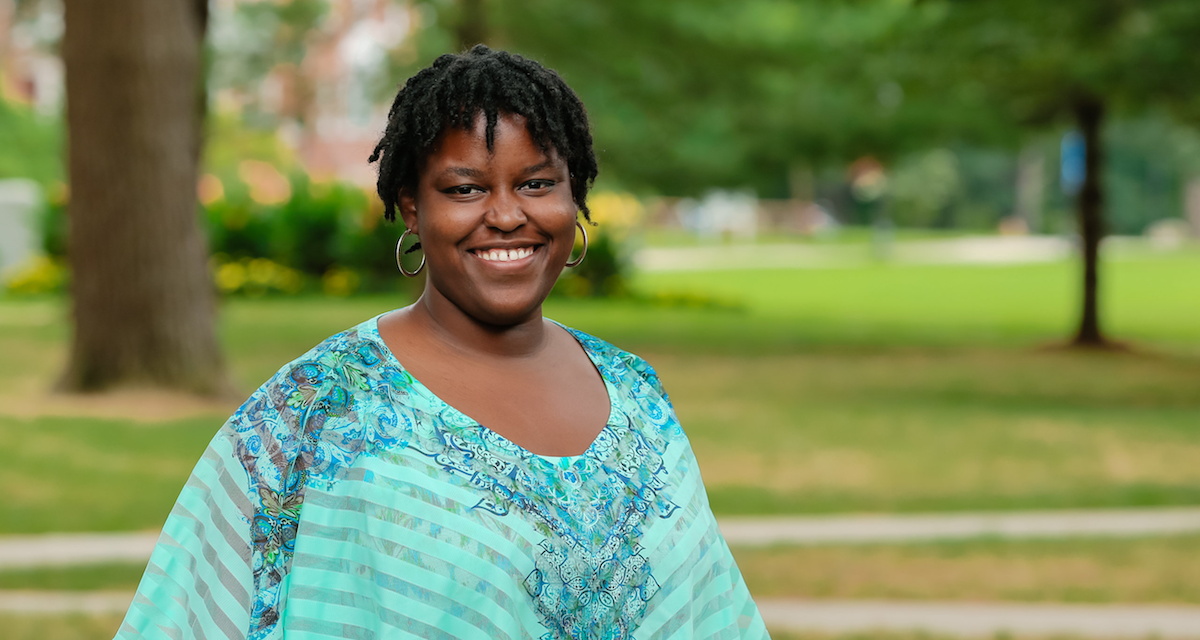 A former art teacher from Chicago, Klamesha Richards discovered a knack for serving college students while pursuing her master’s in intercultural studies at Wheaton College. During one summer, she served as resident director for the B.R.I.D.G.E. program for first-generation college-bound students. “Letting these students see that you can—you can be, you can do, in spite of where you are—that made me want to do higher education,” she says.

“I wanted to work with college students—not just minority students and not just Christian students, but college students,” she says. “Walking along with them, pouring into them—that’s what brought me to life.”

So, in the summer of 2014, Klamesha moved halfway across the country to begin serving as the resident director for Fulton Hall. Today her involvement with students extends beyond “The Hill.” Klamesha has been the keynote speaker at Clarendon Scholar retreats and the Redeem Mosaic Conference, an annual event hosted by ALANA and the Gordon College Student Association to educate student leaders on engaging with diversity on campus.

Earlier this year, she delivered a Chapel address on “Salt of the Earth—Matthew 5:13,” and has given diversity talks at the LEAD Conference and resident advisor trainings. She also plays an integral role on the Multicultural Affairs Committee (MAC), which recently put together a “Shalom Statement” articulating Gordon’s commitment to diversity.

“We are invested in doing it better. We want a diverse campus, knowing that diverse people means diverse issues, so it may mean dealing with things we haven’t dealt with before.”

Being committed to diversity, she adds, means being committed to all facets of it. “The celebrations of Black History Month and Hispanic History Month, the food, the culture—but also the struggles, hardships, hurts and pains that come with a history of oppression or segregation or discrimination,” she says. “It’s been cool being surrounded by people from different backgrounds who have come together to make a statement about what we stand for and what we would like to do going forward.”

Over the last six years, evidence of this dedication can be felt on campus, with a 140 percent increase in international students and a 75 percent increase in domestic minority students. As these groups grow, Klamesha acknowledges that “it’s big for students to have faculty who are like them and staff members who are like them”—a desire addressed in Gordon’s 2020 strategic plan to increase diversity among College employees.

“I’ve seen a lot of diverse speakers in Chapel, which has been great. And having a woman speak for DEEP FAITH week is a positive change,” she says, looking forward to continued change in the years to come. “Effective change takes time,” she says. “You have to go the slow cooker route. Let it set for a couple hours (years) and let come to be what you want it to be.”

Though she left the art classroom several years earlier, Klamesha hasn’t ended her teaching career. “Teaching is a spiritual gift of mine,” she says, “and this campus is my classroom, and the students of Gordon are my students.”

And while much of that interaction takes place on Gordon’s campus, Klamesha has also been active in leading service teams around the globe, drawing on her master’s level research about missions to ensure that the trips are beneficial to all parties. From Boston to Poland to Belize, “missions work broadens the scope of being known and of knowing.” And sometimes, she says, that starts with knowing yourself. “You can’t be self-aware until you’re outside of your own space. That’s a necessary step to actually helping others.”

Three years in, “one of the best things about being here is the building up of community,” Klamesha says, “knowing that I know people and am known by people.”