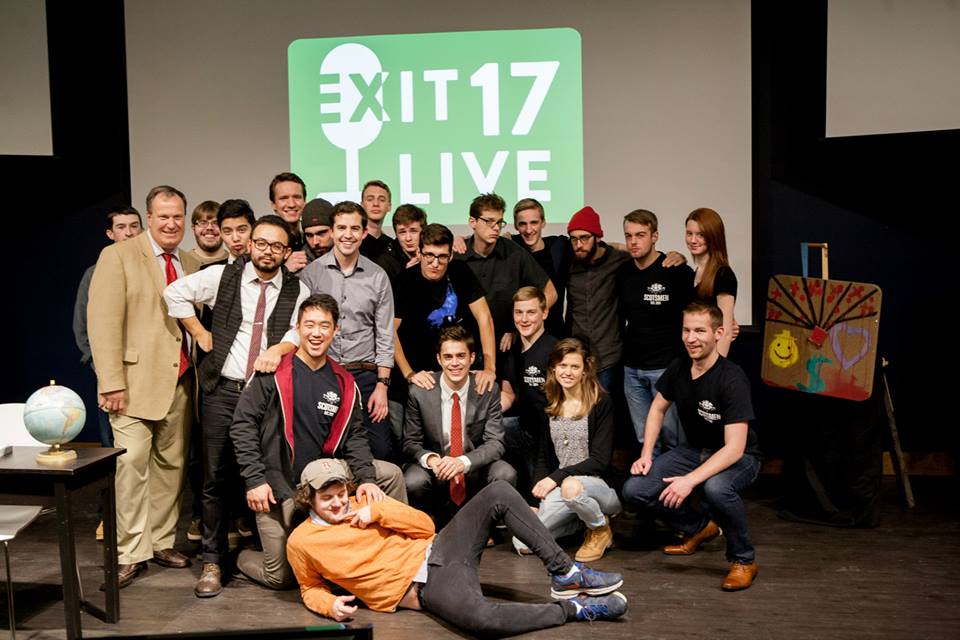 Posted on February 5, 2015 by collegecomm

Live from New York, it’s Saturday night! Or, at least that’s what it felt like. Late Friday night, sandwiched between snow storm giants Juno and Linas, students trekked across campus to find refuge and refreshment on the refurbished second floor of Jenks. Laughter wafted down the hall in the direction of Gregory Auditorium. Inside? The first event of its kind: the pilot show of Exit 17 Live, Gordon’s very own late-night program, live on stage.

Exit 17 Live is modeled after cult classics Saturday Night Live and The Late Show, combining live sketches with musical guests, video segments, games and more. An in-house band plays tunes throughout the night and well-loved campus personality Andrew Farley ’15 serves as host. This formula alone ensures an evening of comedy and comradery but the show has a deeper purpose, according to producer John Buckley ’15.

On a summer train ride last year through the countryside of India, Buckley envisioned Exit 17 Live as a way to reignite student culture and encourage peers to embrace each other’s talents and gifts. “After reading through decades of Gordon history this summer [in the Hypernikon], I saw how much student culture our campus has totally lost,” says Buckley. “I grew up with the idea that if you’re comfortable enough poking fun at yourself and others, you really can be vulnerable and thus grow more in community. That’s real humility. I felt like an SNL / Late Night combo would be the perfect format for some renewal of jest, and student culture.”

The team worked tirelessly to orchestrate the program and did so without any funding from the College. On Friday, January 30, the pilot debuted with special guests Will Martin, David Alvarado, campus a cappella group The Scotsmen, and Gordon College Executive Vice President Dan Tymann. Nearly 400 students crammed into the auditorium and were delighted by the show’s mixture of live and pre-recorded comedy, interspersed with Farley’s comedic monologues. The show was a screaming success and points towards a strong future.

While the pilot show included many familiar faces from campus improv group Sweaty-Toothed Madmen as well as many participants in the College’s annual comedy event, Golden Goose, Buckley promises for a wider spread of talent in future shows. “Other than enthusing campus culture, I pursued Exit 17 Live because I felt there are an incredible amount of people at Gordon who are never recognized,” says Buckley. “There really are so many interesting stories and people on this campus. [During Exit 17 Live] you can expect to hear the story of someone new.”

In preparation for the next show—tentatively scheduled for Saturday, February 28—the team will host additional interest meetings for those wishing to be involved. All students are encouraged to participate. “I think if we can do this right it won’t just be a great show, but also a great opportunity for students from different departments to get involved and combine their talent for a greater purpose,” Buckley says. If you missed the pilot show be sure to catch up at Exit 17 Live’s Youtube channel!