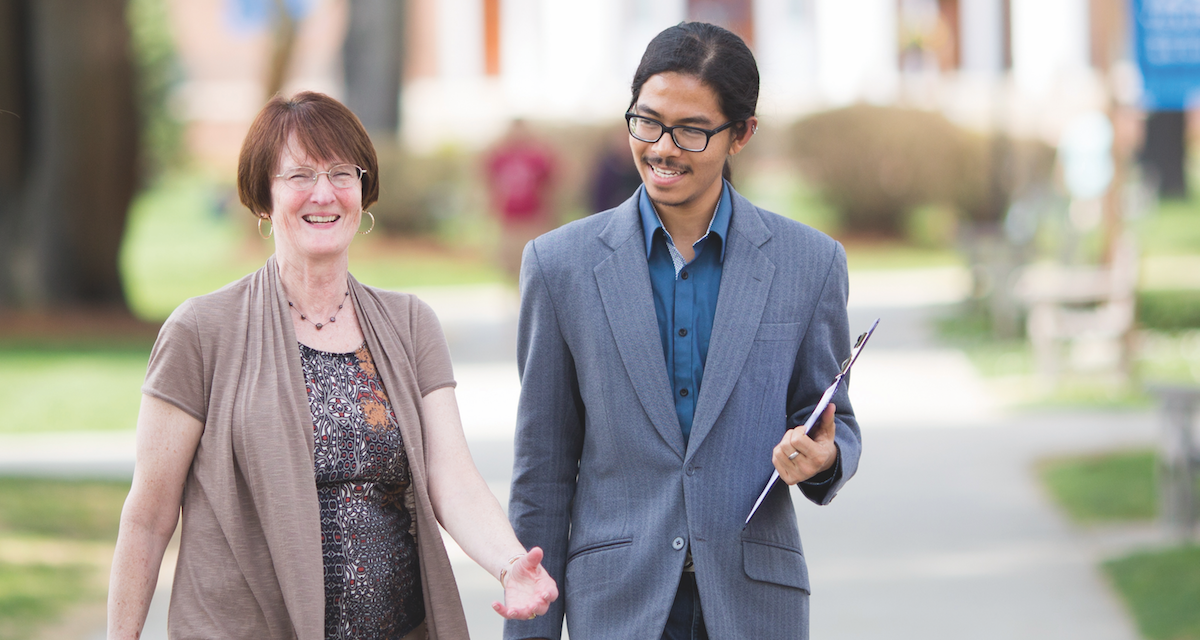 The Art of Seeing the Subtext

There comes a time when mentee and mentor meet their antagonist. For primatologist Jane Goodall and her Ph.D. advisor, Robert Hinde, it was Jane’s lack of formal education and tendency to anthropomorphize. For Helen Keller and her teacher, Anne Sullivan, it was the initial impossibility of communicating. And for Professor of Psychology Kaye Cook (pictured above, left) and Si-Hua Chang ’16 (pictured above, right), a psychology and philosophy student at the time, their antagonist was enigma itself.

Over the course of three years, Chang and Cook created ways to classify their research—on topics ranging from how the Church has changed to whether women should be ordained to national laws that potentially undermine church practice.

They did so without tools to measure their research or check it for errors. They couldn’t synthesize their data with a universally accepted method or algorithm. No Periodic Table of Elements, E = mc², graduated cylinders, pipettes, litmus tests or microscopes.

Their data was qualitative—an amalgam of opinions, testimonies and experiences from the people they’d surveyed.

Because these opinions and experiences can’t be quantified, Chang and Cook came up with a way to map them, with the help of other student researchers. They invented codes—not computer codes or cryptographs, but structures to help them make sense of their data. They looked closely at the words and phrases, trying to identify patterns that might point to something salient about the human experience.

Chang learned to code qualitative research under Cook’s guidance during his first year at Gordon. For the next two years, he continued working as her research assistant—connecting classroom learning to hands-on experience by mapping things like the conservation of old ideas and the integration of new ones, and debating whether and when integration is good.

“It was good to have this experience as an undergraduate, especially as an underclassman,” Chang says in retrospect. “I was taking classes on research methods and statistics. It was much easier to understand a concept because I had something I could map it to in the real world.”

Alongside others like Taylor- Marie Funchion ’18, Isabelle Skillen ’18 and Adam Vogel ’13, Chang and Cook would take turns at the white board, picking apart word definitions and pinpointing subliminal themes buried beneath the surface of human speech. They each would argue for codes of their own. Then, together, they would try to come up with a code that transcended their personal biases.

Chang’s exceptional skills in reading the subtext and connecting data points to construct a bigger picture stood out, Cook says. His involvement in her research didn’t just shape the coding process, it also influenced her own theoretical work.

“Si-Hua’s thinking is virtually in everything I did at the time he was around here,” she explains. “Everything he touches he makes better. He’s a very good listener. He has a real ear for subtext. He understands the context for ideas.”

For Cook and Chang, coding is all about the art of subtext—of reading between the lines to find what’s been there all along but is not said explicitly. And like the very human experiences they’re coding through qualitative research, their mentee-mentor relationship is full of subtext.

During the summer research season, Chang and Cook left the lab for a shared lunch each week. They talked about research, but conversations often went beyond that—to things like the challenges that the field of psychology often raises about the Christian faith. In one another, they not only found a fellow researcher or academic, but someone they could bounce ideas off of in the future.

Chang, now a Master of Philosophy student at Virginia Tech, visited Cook during his spring break last April. As past tradition would have it, they met over lunch to catch up.

“We’re very much still sharing ideas,” says Cook. “We talk about perspective-changing kinds of things.” And, of course, they talk about ongoing research. Chang listens intently and, Cook says, “Lets the ideas wash over him.”

Looking back, now over two years past graduation, Chang says this mentorship experience with Cook gave him exposure to many aspects of professional academic life—a peek behind the curtain that moved him deeper into the world of academia and graduate study.

His plan is to continue on to a Ph.D. program where he can apply his knack for subtext reading and big picture thinking to the real arena of abstract thought: philosophy.

Although the future is still largely uncertain, Cook has every confidence in him. “I don’t know that Si-Hua learned how to think while he was at Gordon because he was a good thinker when he got here,” she says. “I think he gained direction, clarity or maybe even an ability to carry ideas forward. He’s such a complex person. He has a niche out there, and he’ll find it.”