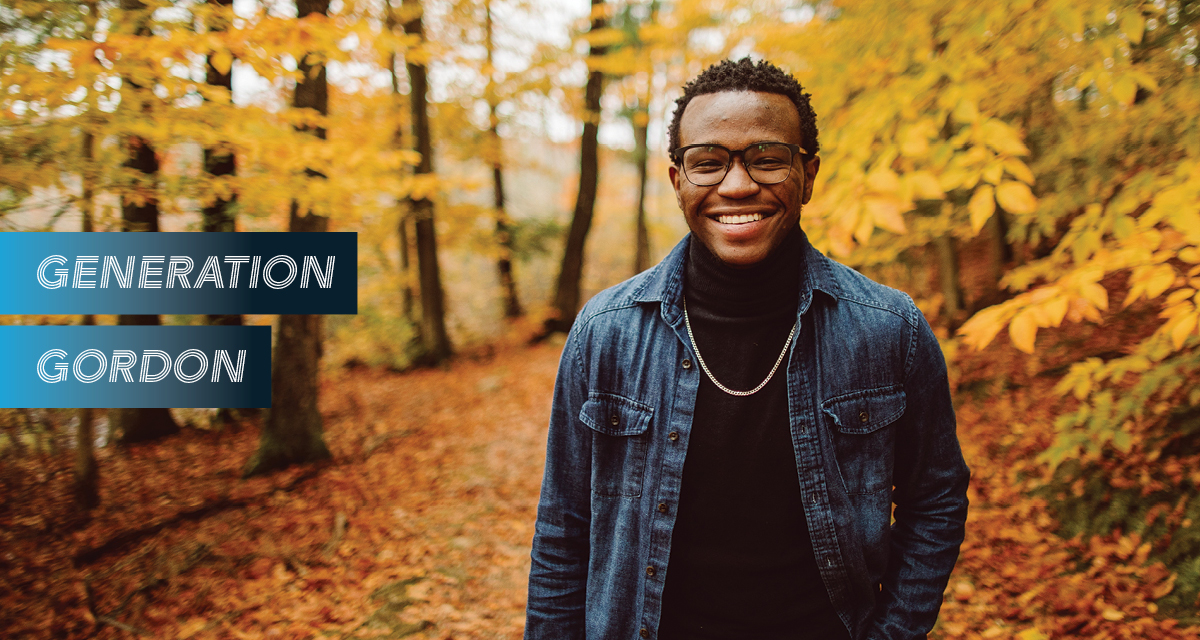 Lifelong city dweller Timeus Mulinge ’22 never envisioned himself sitting cross-legged around a campfire, his skinned knees brushing the sides of his dirt-caked boots, huddled with strangers-turned-friends. But it was that very setting, he says, “that made me open up, and that was the first time I opened up in a long time. It was therapeutic.”

For one weekend, during Mulinge’s Discovery course camping trip, the constant buzz of Mombasa, Kenya’s, cars and tourists was replaced with the soft thrum of cicadas deep in the White Mountains of New Hampshire. Towering pines replaced skyscrapers, and the only light source was the glow of the fire and tapestry of stars above.

“It was pretty silent,” he says, “but it was absolutely breathtaking.”

In a place as foreign to him as the woods of America, Mulinge found something he had needed: the space to connect more deeply with God, with his peers and with himself. “Discovery drew me closer to God,” he says, “And it drew me closer to his people and to understanding how I can help as a person and as a designer.” As a self-professed introvert and a creative, this was an important, well, discovery.

Mulinge is an aspiring architect, meaning his life’s work will be about developing buildings and indoor spaces for people to live and gather in. But to accomplish that, Mulinge found, he needs the opposite: a quiet place without the bustle of restaurants, houses and workplaces.

“Even now,” he says, more than a year after his Discovery course, “I wake up sometimes, head up to the woods and just sit there and absorb everything as I do my reflections, drawings and architectural designs.”

Though he’s found a new affinity for the woods, Mulinge still shares his heart with the city. And maybe they’re not so different after all. In the city and in the woods, he says, “there’s always a challenge, an obstacle.” It may look like finding a taxi or finding water, navigating through winding road work detours or through overgrown trails. “No matter the environment or the setting you’re in, you work with what you have to find a way to achieve what you want.”

That’s true of art, too, he says. As the child of an architect-turned-pastor and an interior designer, Mulinge has long had an appreciation for art. But art, he says, is not just a painting (or, in his case, a CAD sketch); it’s the ability to create something out of what you have.

At Gordon, that means forging an architectural bent into Mulinge’s art major. He works with his professors to connect his coursework to his goal, like investigating how ancient architecture (zigguratts, pyramids and the Parthenon) inspired modern architecture (the U.S. Capitol and White House, Walt Disney Concert Hall and Burj Khalifa) for a history course. In Old Testament, he studied the architecture of the City Gates and the Tower of Babel in biblical times. And he’s applying lessons from a science course to study “how structures can minimize the contribution we make to global warming” so he can “make designs that are favorable to the people of the future.”

Mulinge’s end goal in sculpting his education is not just to become an architect, but to build a better world—“to expand my knowledge as I follow my dream, pursue God and use what I do as a form of ministry,” he says.