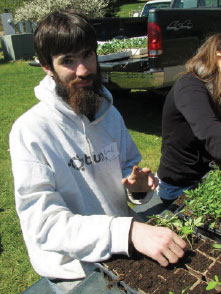 During his first year at Gordon, Zach Capalbo collaborated with philosophy professor Brian Glenney to create a prototype of the Kromophone, a sensory-substitution device that translates color into sound. With another Gordon student, they tested it by wandering blindfolded through Harvard Square, becoming increasingly excited about the device’s potential to unlock the mysteries of the visual world for the blind. A secondary goal, Zach says, was “to allow users a pleasing experience of visual artwork while blindfolded.”

He and Dr. Glenney coauthored a scholarly paper about the device, and in the fall of his sophomore year Zach travelled to Tokyo and presented the paper at the Asia-Pacific Computing and Philosophy Conference.

His years at Gordon as a physics and computer science double-major were full. During a summer research stint, he worked on hardware and software control for a three-axis micro-engraver, and researched applications for microfluidics. The project that consumed his life senior year was exploration, with Dr. David Lee (physics), of the intersection of fluid dynamics and nonlinear acoustics, which Zach says “reaches into the boundaries between thermodynamics and chemistry.” It’s a field of research, he says, with many tantalizing gaps left to be filled—with possible practical applications for the biochemical and biomedical fields, next-generation user interfaces, and oil and gas exploration.

Zach clearly dwells in what programmer Ellen Ullman has described as that “mysterious space between human thoughts and what a machine can understand, between human desires and how machines might satisfy them.” He’s carried that orientation into his current work with Thermo Fisher Scientific, a leading technology company near Boston that serves pharmaceutical and biotech companies, hospitals and clinical diagnostic labs, universities, research institutions and government agencies.

His group at Thermo Fisher makes handheld X-ray fluorescence spectrometers—devices that look like guns. “When you point them at something and pull the trigger,” he explains, “it tells you the elemental composition (for instance, 75% iron, 10% copper, 5% nickel, and so on). I work on the algorithm software, turning the physics equations and principles that our scientists come up with into something that someone can use on the device.”

Zach is no cloistered lab whiz; he’s eager to involve others in his explorations. In his spare time he continues to refine the Kromophone, “an open-source project,” he says, “which means that you’re free to download the source code, make changes, and copy it for your friends as you see fit.”