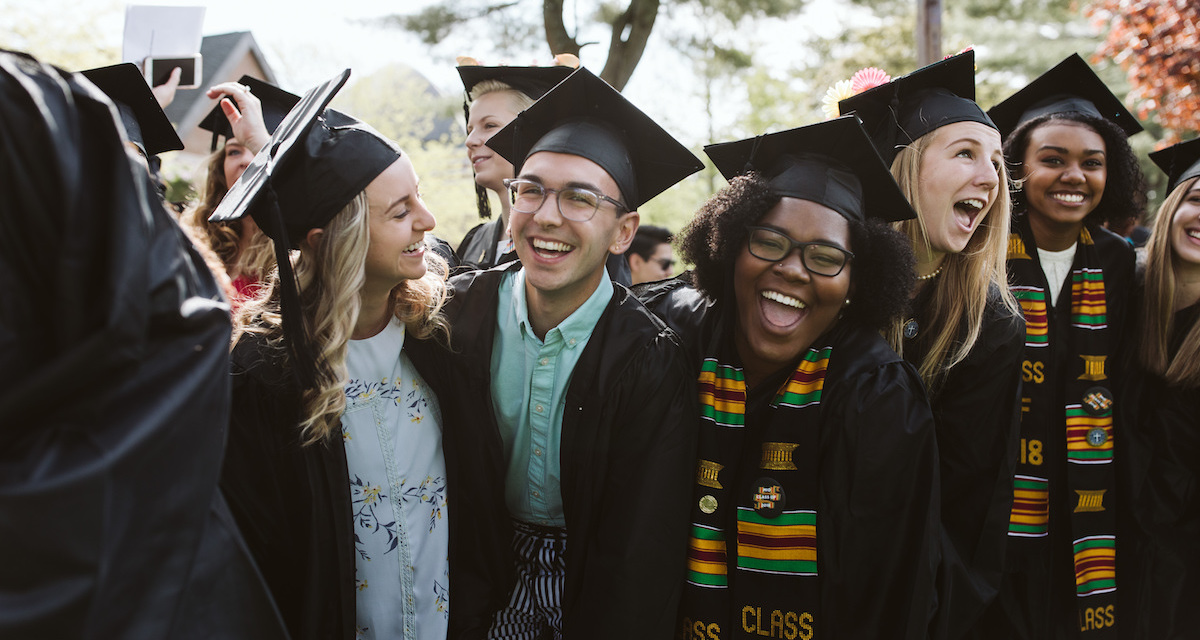 Saturday, May 19, the graduating Class of 2018, along with their families, friends, members of the faculty, staff and Board of Trustees, celebrated Gordon’s 126th Commencement outdoors on the campus of Gordon College. There were 352 baccalaureate degrees presented in the arts and sciences, and 93 graduate degrees in Education, Music Education and Leadership.

D. Michael Lindsay, the eighth president of Gordon College, presided over the ceremony which notably included the inaugural graduating cohort in Graduate Leadership. In his address, “Stones as Witnesses,” Lindsay spoke directly to the graduates as they seek to define the marking events in life.

“The God who brought you here will go with you as you launch into a new place and a new season,” he said, emphasizing this Commencement as a day to remember, renew and to reach: “Just as He cared enough to bring you to Gordon College, so also does he care enough to lead you forth from this place.” In his final remarks, Lindsay defined life after graduation as a season to reach for what’s ahead while pointing heavenward. “May your life become a stone cairn,” he said, “a marker of God’s goodness and grace—and a signpost for others to see all that God has in store.”

Three honorary degrees were presented by Herman Smith, Chair of the Board of Trustees, and President Lindsay. Kenneth G. Elzinga, the Robert C. Taylor Professor of Economics at the University of Virginia, received a doctor of public service degree, and doctor of divinity honors were presented to Richard Stearns, president of World Vision, and Gordon alumna Pauline Wilson ’57.

This year’s Senior Distinguished Faculty Award went to Marv Wilson, Harold J. Ockenga Professor of Biblical and Theological Studies, and included the Provost Office first-ever “side-kick award” to his wife, Pauline. Provost Janel Curry presented Susan Bobb (psychology) with the Junior Distinguished Faculty Award. “I’m following the pattern set by my colleagues and it’s their collaboration that played through my mind as I received the award,” Bobb said, emphasizing that the work she does is intricately tied to the Christ-centered reciprocity, care and work of others at Gordon. “It makes me proud to be part of the Gordon community where we genuinely want to see each other succeed and fulfill God’s calling.”

The Commencement exercises on Saturday were part of a full weekend of activities beginning with senior brunch Friday morning, the senior class portrait and the evening Baccalaureate worship service. Preaching the sermon was Dr. Wilson—Gordon’s longest-serving professor, of 55 years. Dr. Wilson is a New International Version (NIV) Bible Old Testament translator and editor and is one of the world’s primary scholars in Jewish-Christian interfaith dialogue.

To date, the senior class gift presented during the Commencement ceremony, is one of the most environmentally-focused class gifts received at the College—solar panels for Grace Hall.

Marked by flags of every nation from where 2018 graduates hail, and intertwined with bright blue academic flags representing the fields of study, the graduates exited the ceremony in their final walk as the Class of 2018—ready to begin their next chapter while pointing heavenward.

View photos from the ceremonies and the Senior Brunch taken by Gordon Photographer Mark Spooner.