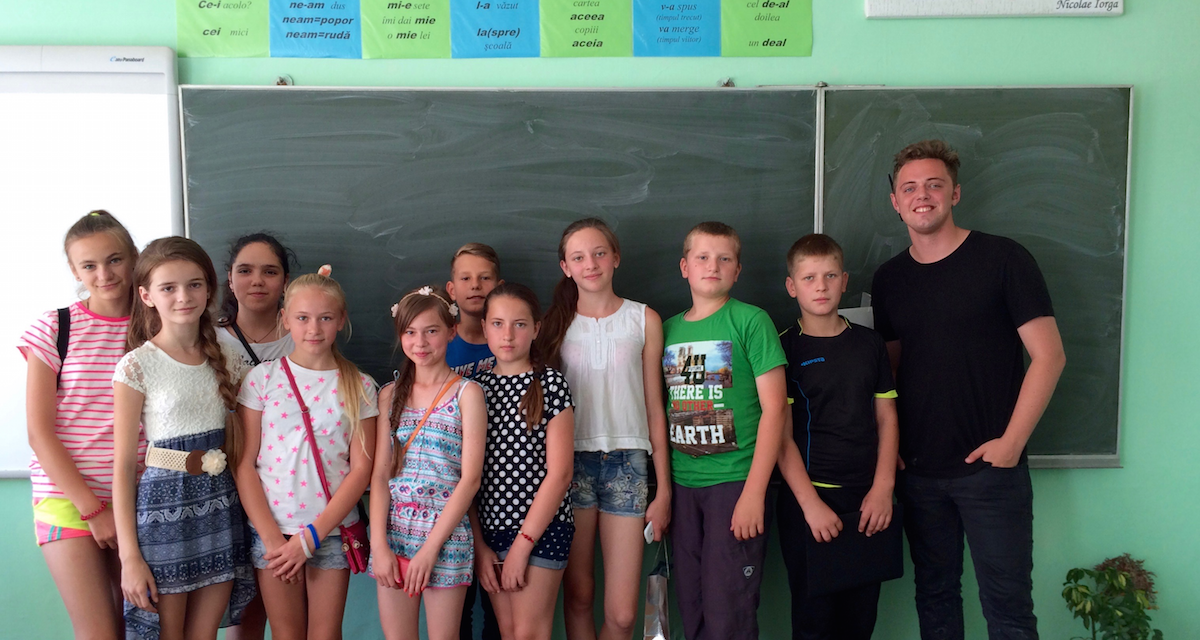 When Alex Bostian ’16 arrived in Moldova in early summer, he didn’t speak one word of the language. But by early fall, he was teaching classes in both English and Romanian. It was one of many transitions for the recent grad, who will spend the next two years in Eastern Europe as a Peace Corps volunteer.

“I wanted to experience more firsthand the intricacies of how communities work, and I think that a Peace Corps volunteer gets an especially focused look at what a community is like when you’re both an insider and an outsider,” he says.

Alex teaches English to 11th and 12th graders in a tiny country only two years older than himself, still stiff with cold Soviet traditions. But where Soviet influence exists in the school system, Alex (who is one of only two male teachers in his school) seeks to thaw the ice.

“I love the work we’re doing here,” he said. “It’s promoting a more comprehensive student-centered education. The main goal is that we incorporate a student-centered, discussion-based classroom environment with our students.”

It is a method of teaching that Alex’s students respond to. He meets with students who want to become more fluent in English and helps them engage in political discourse. They were excited when he began an English club on the first day of school.

Because the Soviet mindset permeates gender roles in Moldova, generally keeping women in more domestic roles, Alex has been gratified and excited to find his female students enthusiastic about political engagement.

When he’s not teaching, Alex’s secondary project is to create a Model United Nations conference for Moldovan students—and hopes that more female students will be involved. He said that his students have expressed concern about Moldova’s high rate of population decline. Many middle-aged citizens, he says, are leaving the country to become migrant workers in Central Europe, Western Europe and the Middle East.

“I have a lot of students here who know that it’s a problem and say, ‘At this rate, Moldova’s not going to be a country. We’re losing people so quickly and it’s already tiny. We want to learn more about what we would do in our country if we were to stay,’” Alex said.

The project is thriving, he says, but he hopes to expand it further. To make the two-day Model UN conference a reality this spring or the next, he is partnering with two fellow volunteers in Moldova to develop training materials for other volunteers to distribute to their students in the country. Alex, who participated in Model UN at Gordon and in high school, is pulling from his experience to teach students how to debate well and work toward compromise, what to wear to a conference, the history of the UN and basic ideas about international affairs (which he studied at Gordon).

“I hope that they’ll take away a better sense of the importance and the role that Moldova plays in the international sphere because the country is so small in the grand scheme of things,” he said. “I hope they’ll see their role as important in the future of this country and the future relations with its neighbors.”

It is a pivotal time for Moldovan students—especially women—to engage in politics, Alex says. This month, the 25-year-old country held its first-ever democratic Presidential elections. “Moldova is still a new country,” he said. “I’m trying to push more thoughtful, conscientious public engagement for my students because now is a really exciting time to be here.”