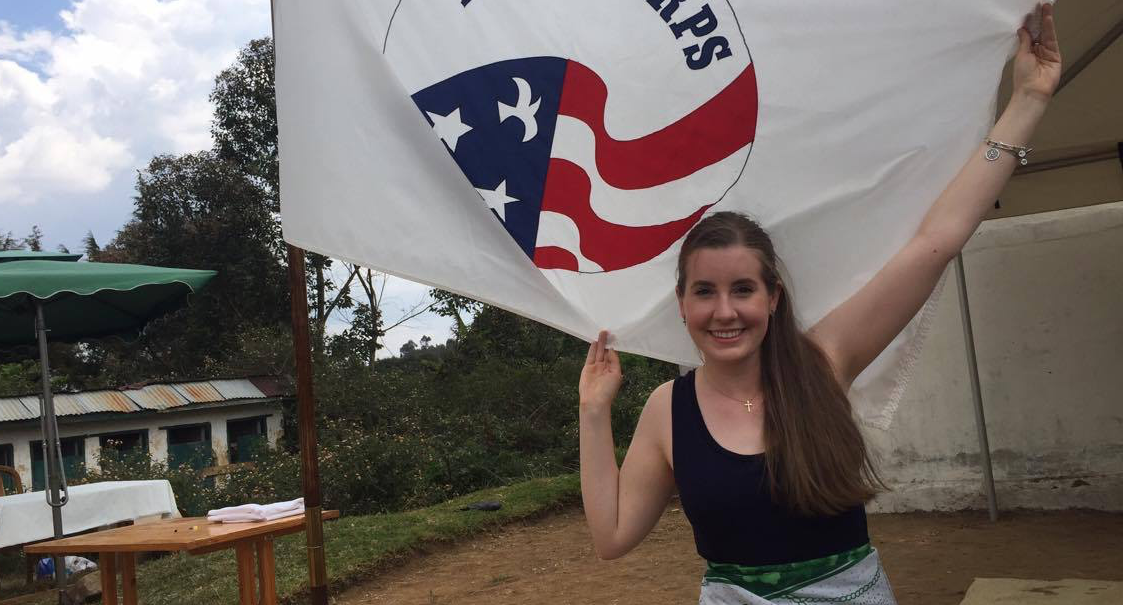 Alumni in the Peace Corps: Community and Diplomacy in Madagascar

When Emma Barclay visits the market stalls of her town in Madagascar, children point at her and say, “Vazaha, vazaha”—“foreigner, foreigner!” She is the only Caucasian person in the small town near Antsirabe, but the children mean no harm by staring. It is mere curiosity.

The 2016 alumna is currently a Peace Corps volunteer on the African island, teaching English at a private Lutheran school. Because the French system of grade levels is used, her students are in the years of Primaire, Sixième, Cinquième, Quatrième and Première (young elementary students as well as sixth, seventh, eighth and eleventh grade). Conveniently, Emma studied French at Gordon, but she spends more time using the native Malagasy language. Three months of intensive training during the summer prepared her for the two-year Peace Corps term.

But it is not just French and Malagasy cultures that permeate Emma’s daily life. The combination of African, Asian, Austronesian and old colonial cultures, she says, make Madagascar an interesting country to call home.

“It is such a unique blend. I find myself picking out the individual aspects and enjoying them one by one. For example, Malagasy music is very influenced by African culture, as it has a very fast paced African rhythm. Little things like that often jump out at me. Each one of them is what makes up Malagasy culture and I find that very beautiful.

“Madagascar is also a very diverse nation, with the cultures and climates being quite different from each other. In the central highlands where I am placed, right now it is fairly cool and it is peach and cherry season. However, in the south, right now it is very hot and it is lychee and mango season.”

Despite being the only foreigner in an overwhelming diverse place, Emma has not found difficulty assimilating into the culture. In fact, a sense of friendliness and togetherness in community was the biggest culture shock that she encountered. “In Madagascar, it is very much that we are one community,” she said.

She sees this sentiment in the classroom when students help each other with work on the board. Though her instinct is to want the kids to do their own work, she realizes that they are accustomed to supporting each other.

It is a concept that applies to her life there, as well. “I don’t have to try and be self-sustaining,” she said. “I need to depend on other people, which is counterintuitive for Americans sometimes. You want to do things on your own, but you have to learn how to do it with people in this society.”

When she encounters the inevitable days of self-doubt, Emma says that it is the community that lifts her up. “It’s actually leaving my house and going out into my community, even if it’s just to the market, that bring my spirits back up,” she said. “Many people in my community have really helped with building me up in confidence. I am definitely learning more than I am teaching. Every day my community gives me so much. I can only hope to give them back as much as I am able in two years.”

Immersing herself in a new culture is an insightful endeavor for the international affairs grad, who later hopes to join the United States Foreign Service. “The Foreign Service is embassy work and diplomacy, representing America and American values abroad,” she says. “They look for candidates who can live comfortably abroad and adjust to different cultures and languages, which is a lot of what the Peace Corps is about.”

She puts her degree to work in observing the effects of Madagascar’s diverse culture and history, and its implications for politics. Emma is fascinated by the firsthand example of conflicting and mutual interests between nations in diplomacy.

“I have a desire to understand both sides of nations’ stories and to then find a middle ground or a compromise,” she said. “I find there is often a view of other nations being considered ‘the other’ or ‘alien.’ My desire is to see other nations not as some unknown, but as a friend or ally and to instead further understand them. By understanding other nations, we can appreciate their interests and there would be less conflict, I believe.”