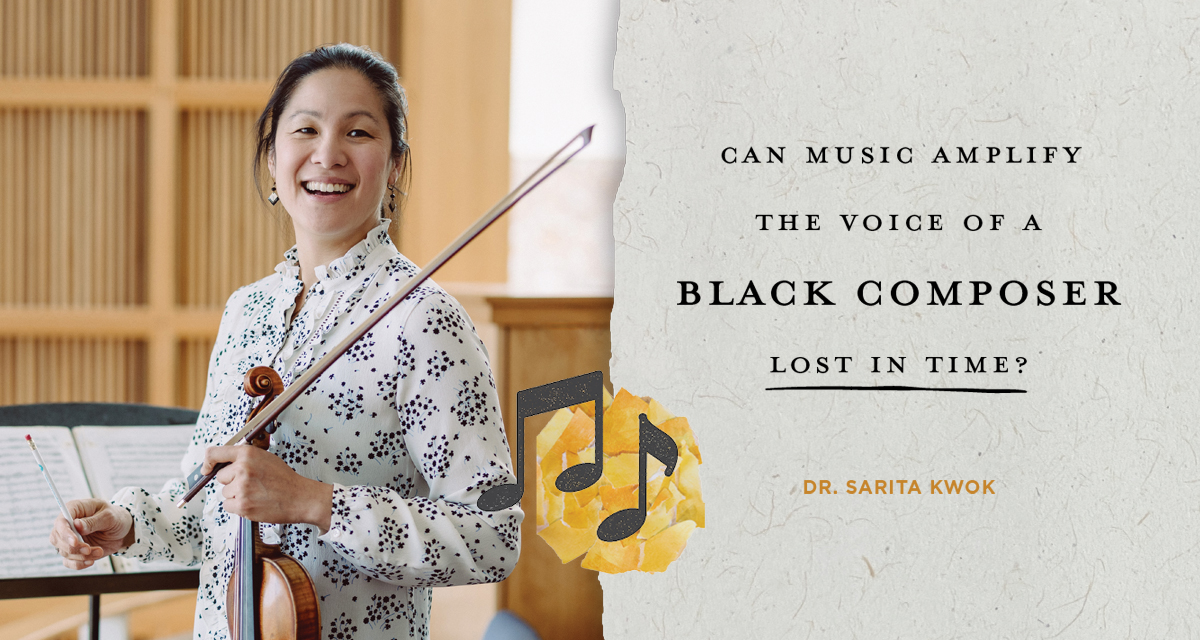 Once upon a time in 18th-century France, the son of a nobleman and a Senegalese slave became the premiere, high-society fencer and a violin virtuoso. Born in Guadeloupe, Joseph Bologne, Chevalier de Saint-Georges, performed for Marie Antoinette, served as a colonel for Europe’s first all- Black regiment, and was nearly condemned to the guillotine during the French Revolution for his connection to the aristocracy. In his time, Bologne—controversially dubbed “the Black Mozart”—supposedly rivaled Wolfgang Amadeus himself in reputation.

Even though Bologne’s life sounds as though lifted from a romantic tale, his legacy and music have been largely unknown until recently. And Adams Endowed Chair in Music Sarita Kwok wants to help bring him back into the spotlight. “It’s important because the music is worth hearing. It’s great music that we don’t play as much as we should,” says Kwok, a violinist in the Arabella String Quartet.

After Artaria Editions published a performance edition of Bologne’s Six Concertante Quartets based on a 1779 first edition (the earliest known version of the pieces in existence), Naxos Records called on the Arabella String Quartet. Having recorded with the label in 2017, the New England-based group was to make history by recording Bologne’s Six Concertante Quartets for the first time together as a set. The album was released on May 27, and the months in between commission and premiere were filled with careful, intentional creativity to tell Bologne’s story through music.

“When you record music it’s memorialized in time,” says Kwok. But because the earliest available edition of Bologne’s Six Concertante Quartets contains errors—clashing notes, mismatched rhythms and inconsistent articulations—she says, “We didn’t always know exactly what Saint-George’s intentions were based on the score alone, and we didn’t have a framework of performance history on which to base our interpretation.”

The violinists, violist and cellist dove into the world of Bologne, reading about him and listening to his existing recorded works. But even a lexicon of knowledge may not sufficiently inform a musician who wants to capture a composer’s unique musical fingerprint. To capture just the right sound of Bologne on their album, they collaborated with Dr. Allan Badley, chief editor of the Artaria Editions score, to experiment with details like articulation, tempo and musical coloring.

“We made educated and artistic choices based on our understanding and reading of the score, and we used our instinct,” says Kwok. “We had to use our imaginations and to try capture a sense of who he was as a person.” In fact, she says, Bologne’s fencing expertise is evident in the music. In one of the many approaches the Quartet took to bring him to life, they built on the idea of “sparring” violins—Kwok and Danish violinist Julie Eskar alternated playing first and second violin for different quartets in the set, and sat facing each other to produce an “antiphonal” sound.

As seasoned musicians, Kwok and her fellow Quartet members are intimately familiar with 18th-century music. But most composers from that era who remain in the classical canon hailed from the Austro-Hungarian empire and Germany. What kind of music would an 18th-century Black Frenchman write? “It’s just not the same musical language, even though it’s from the same period of time,” says Kwok. “It’s like traveling in a time machine to play something that’s hundreds of years old, right now, for the first time.”

But without a spark of inspiration, even excellent technique lacks artistic power, and the sound of notes on a page may fail to connect with the listener. So, before the Arabella String Quartet entered the recording studio, Kwok says they gave livestreamed and recorded performances to experience the music in real time with an audience. Kwok says these moments ensure the recording “has life—that it doesn’t sound like you’ve just edited together notes. That you are playing it like a real piece of music for real people who are present with you in that moment.”

While listeners may not think about the planning, researching, recording and editing, Kwok says the patient process is crucial for accomplishing two goals: “First, so that the album sounds as authentic and alive as live performance. Second, that it contains everything that we want to say on that disc.”

Pressing “play” on the 52-minute album, Kwok hopes listeners clearly hear the voice of a fascinating individual whose work brings a unique perspective to the musical canon. She says, “We are giving composers whose works have been obscured by history the voice they deserve.”