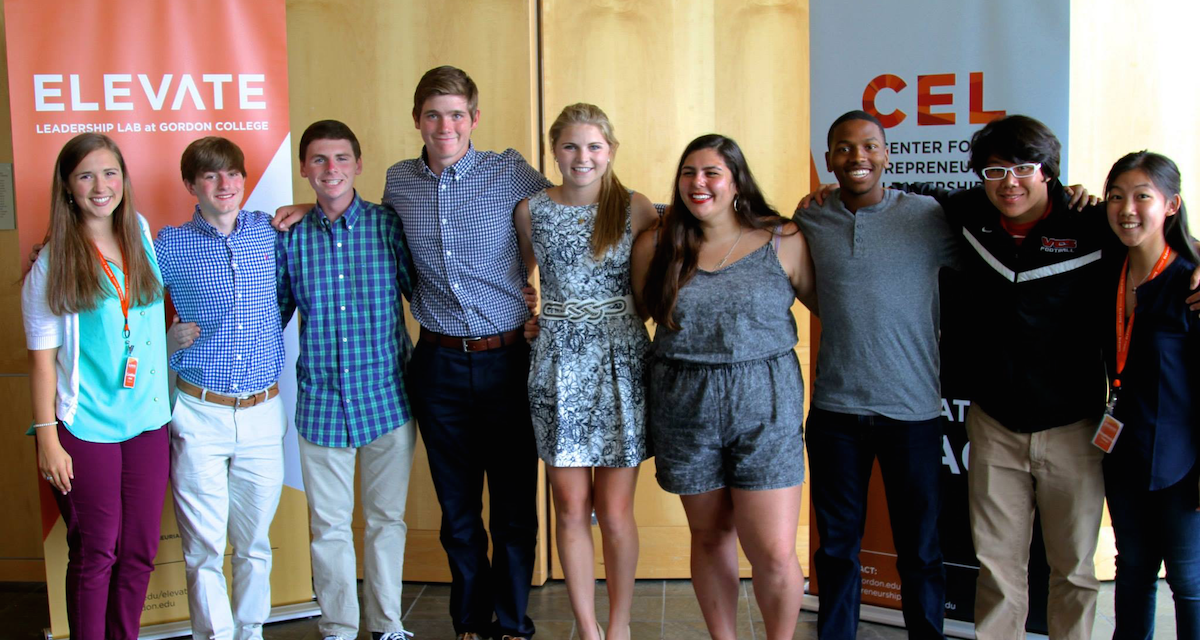 Elevate is a weeklong leadership institute for talented high school juniors and seniors. Held at Gordon each summer, the institute draws students from all over the United States and the world to develop their leadership abilities and gain tools to transform real social problems. Participants identify problems in their hometowns, create a solution with their team, and present their plan before a panel of judges. Winning projects receive seed money to get their ventures started. As Gordon gears up for Elevate 2016 (July 24–30), The Bell will feature stories of Elevate alumni who are using their entrepreneurship skills to make a positive impact within their communities.

As Branford Barnes of Carrollton, Texas, prepared to travel to Gordon last summer for Elevate, he was “nervous because I didn’t know what to expect.”

The headmaster at Branford’s school had nominated him, but Branford knew little about what was in store. However, as part of his application, he pitched the idea of raising awareness about sex trafficking, a cause he was already passionate about. The idea was chosen for his entire team to tackle during Elevate.

Branford first heard about sex trafficking two years prior, through a social media link to The End It Movement. At that time, “I thought slavery only included bondage. I didn’t know there was still sex slavery.” When he learned about it, “I really wanted to be involved in stopping sex slavery.”

After Branford provided the initial idea, his Elevate team came up with a mission statement to guide their efforts in raising awareness about sex trafficking near his hometown: to “create empathy and responsibility throughout Plano, Texas.” To that end, they planned fundraising and advertising. “We figured out how much the project would cost,” Branford says, and then “wrapped the presentation up with quotes from the community, like police officers, to emotionally grab the audience.”

“I found what I was good at—being a listener,” he says. “My role was to make sure all ideas were heard and also to connect the ideas of the group with what needed to be shown to the audience.” As the group’s diverse talents coalesced throughout the week, their plan grew stronger—and their final presentation yielded finalist status.

Later that year, Branford presented his team’s plan to the head officials of his high school. Using the PowerPoint from Elevate, he explained the prevalence of sex trafficking and asked to start a club. “They said yes,” and the club started in the spring of 2016.

“I didn’t know if anyone would show up for the club,” Branford said, but “people were really enthusiastic.” Now, the Sex Trafficking Awareness Club meets weekly.

“We spread awareness through creating bracelets, one bracelet for the persecuted church, one for life, one for sex trafficking awareness,” Branford explains. At the high school, the club brought a chapel speaker from Love146, an organization that works to end child trafficking worldwide. In the future, the group hopes to add a Walk for Life fundraiser and a movie screening to their efforts.

Branford’s experience at Elevate helped to prepare him to lead the club at home. He says, “At first I really didn’t know what to expect, but part of being a Christian is being uncomfortable. You get to grow as a person when you’re uncomfortable. Once I did that I found my purpose.” While working on his team’s project, “I learned a lot about how to be a leader and make sure everyone’s voices were heard.”

“I had to get out of my comfort zone socially,” but in the end, “the part of Elevate I liked the most was the friendships and bonding time with my group,” Branford says. “I cherished getting to know what makes each and every one of us unique.”

Pictured above: Branford (third from right) with his Elevate team