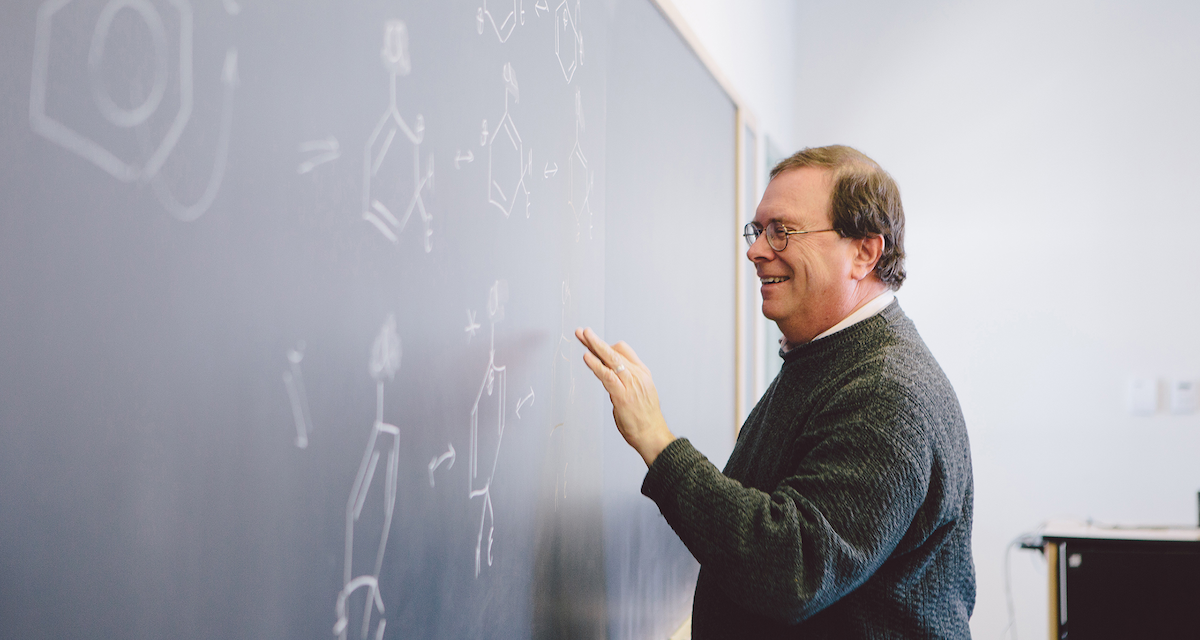 Irv Levy, professor of chemistry and computer science and chair of the Department of Chemistry at Gordon College, has been named to the 2017 Class of American Chemical Society Fellows for his significant contributions in advancing the field of green chemistry education, including expanding the community of green chemists, contributing scientific communications, and increasing student engagement as well as his excellence in service to the Division of Chemical Education. Levy brought in new cross-divisional programming to the chemical education program and introduced relevant green chemistry programming.

Levy is one of four scientists in Massachusetts to be honored. This significant honor is given to one or two percent of members who have demonstrated outstanding accomplishments in chemistry and have made important contributions to the American Chemical Society (ACS)—the world’s largest scientific society. Levy will be one of 65 ACS Fellows honored at a ceremony in Washington D.C. on Thursday, August 21 during ACS’ 254th National Meeting and Exposition.

“I am humbled and honored to be recognized by ACS, an organization that I first joined as an undergraduate student back in the 1970s,” said Levy. “I love bringing our students to ACS conferences, watching the amazing work of Gordon’s ACS student chapter, and wondering if some of my students will still be involved with this great organization 40 years from now. I hope so!”

Levy has served Gordon students and his colleagues across two academic departments since 1985. His interests in chemistry are primarily related to the development of educational resources for green chemistry—chemistry that is inherently safer for human health and the environment. Levy is often praised in higher education scientific circles as a leader of a growing revolution in green chemistry practices and education. “We are thrilled that Professor Levy has been honored for his longstanding service to the American Chemical Society through his selection as a Fellow for the organization,” said Acting Provost Sandra Doneski. “This prestigious appointment recognizes his commitment and contributions to the society over nearly forty years of membership. At Gordon, we are well acquainted with Irv’s passion for green chemistry and his patient tutelage of students in the field. It is a joy to see his work celebrated well beyond our campus borders, within the world’s largest scientific organization.”

Levy is a founding member of the Green Chemistry Education Network and a member of the American Chemical Society, where he currently serves as program chair for the Chemical Education Division. He is also a fellow of the Royal Society of Chemistry, a member of the governing board of Beyond Benign, and a sought-after speaker. His talks range from presentations for the U.S. Environmental Protection Agency to green chemistry demonstrations with his students in Gordon’s ACS student chapter at the Boston Museum of Science and beyond.

ACS was established more than 140 years ago with the goal of transforming lives through the power of chemistry. The organization acts as a catalyst for information sharing, research and education with the aim of advancing chemistry and innovation through career development programs and product and outreach services across the globe. Unlike many scientific society fellowships, the ACS Fellows honor recognizes members not only for their scientific expertise and professional contributions in the larger peer community, but also strongly takes into account the strength of the individual’s volunteer service to the ACS community at large.

← Making Strides in Medical Research, One Step at a Time
Literacy STEMs from Education Efforts in Cambodia →