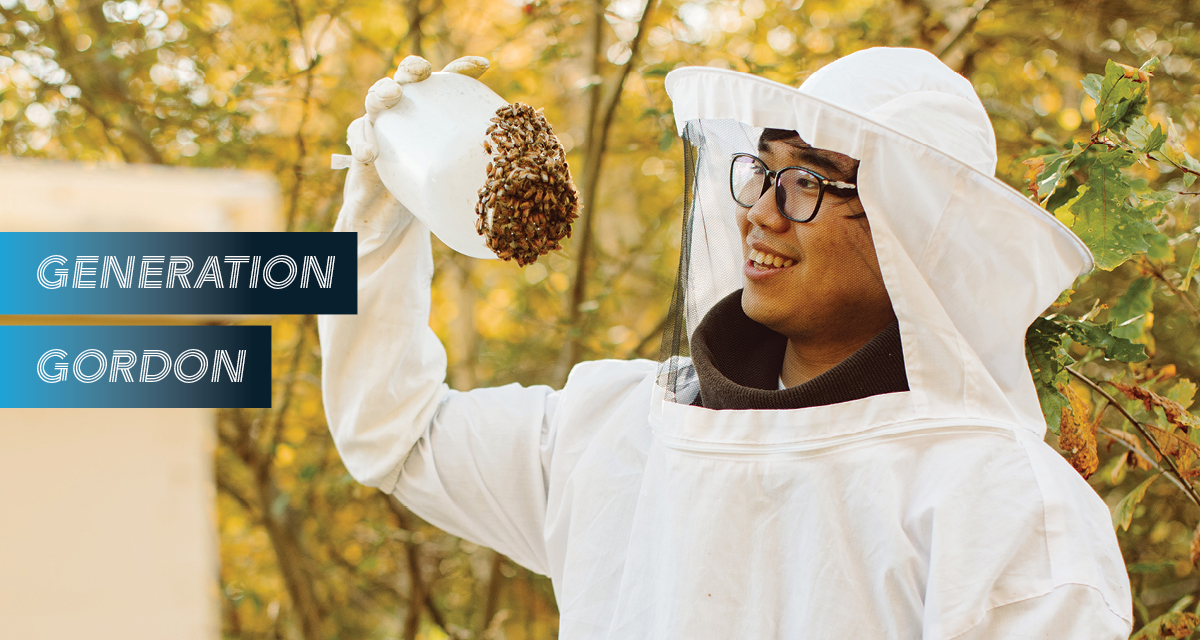 The Secret Life of Bee. . . Researchers

Daniel Ha ’20 didn’t get his first bee sting until last summer, when one of his research subjects crawled up the inside of his pant leg and stung him on the thigh. It was a rite of passage—the day he became, in his own words, a beekeeper.

Growing up in Chiang Mai, Thailand, in a missionary family from South Korea, Ha didn’t cross paths with honey bees. It was too hot for them in the city, so they retreated to the mountains. He was blissfully unaware of them until a family friend brought over a jar of 100 percent natural, wild honey. “It smelled so bad,” he laughs. “But it got me thinking about bees.”

On YouTube, Ha learned that honey bees were disappearing. Each year, beekeepers in the U.S. reported colony losses around 30 percent. The losses were the same for beekeepers in the mountains of Thailand and virtually everywhere else. Loss of habitat, lack of crop diversity and poor beekeeping practices were all part of the problem, he says, but the single most devastating factor was a virus that was causing wing deformity in perfectly healthy bees.

It didn’t take Ha long to put two and two together. “Bees are the main pollinators for most fruits and vegetables. I knew that if honey bees aren’t here, we won’t be here either,” recalls Ha.

At Gordon, he joined the Beekeeping Club and helped care for the observation hive on the third floor of the science building. And last summer, he was hired as a research assistant for Professor of Biology Craig Story.

In collaboration with other researchers, including the principal investigator of the U.S. Department of Agriculture’s (USDA) Bee Research Lab in Beltsville, Maryland, Story and Ha investigated bee viruses, like the deformed wing virus (DWV), that are found in colonies and are putting bees under stress. They looked for ways to treat infected colonies and to see if the viruses were coming from the very nutrient that was supposed to be sustaining honey bees during the harsh winter months: pollen.

“Without our support, bee colonies can’t make it through the winter on their own. We feed them pollen, which is a source of protein and sugar,” explains Ha. “These pollens get shipped around the world. Governments have little to no regulations for them. We wanted to know if pollen was capable of carrying the virus. If that’s the case, we have to have regulations in place.”

While Korean musicals and live versions of “Piano Man” played over laptop speakers in the lab, Ha analyzed samples prepared by a USDA research fellow. After temporarily relocating the colony, Ha also heated the beehive to see if heat treatments could kill the virus. And it worked. At 70 degrees Celsius, “you can actually reduce the spread of infection,” he says. Ha, Story and their collaborators continue trying to learn more about the sources of viruses and possible ways to prevent their spread.

While the jury is still out as to whether pollen is responsible for the spread of DWV, it’s definitely a suspect. Ha and Story found evidence of the virus in pollen DNA. They also found proof that Ha’s childhood dream of being a researcher is anything but far-fetched.

“When I was little,” says Ha, “I thought a researcher was a white-bearded grandpa in a lab coat, a kind-looking guy holding a boiling test tube.” Although it will be several years before Ha can grow a white beard, he’s got the test tube, a lab coat and research subjects that definitely need his help (even if they do sting him from time to time).

Editor’s note: This article has been updated from its original version to include Ha and Story’s research collaborators.